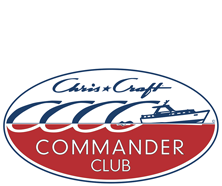 Replacing ALL instruments with iPads

You read the headline right, I replaced all engine and navigational instruments onboard my 1967 31’ Commander with two iPads. I used this setup four seasons now so I am confident in saying it works like a dream.

Before going into details a warning might be in order. This is not a project for the faint hearted nor if you are on a budget. Furthermore, what I am about to describe is probably regarded as blasphemy among those who prefer to keep everything as original as possible. To those I apologise and suggest you close the post now. The rest of you, have fun!

When I bought my 31’ Commander in 1998 about half of the original engine instruments had been replaced with non Chris Craft stuff by PO. Some didn’t work properly. At the time, I deemed it impossible to find Chris Craft replacements, or getting someone to repair the ones I had. During the major restoration of the boat 1999 I replaced all instruments with traditional gauges ones and was happy with them. But as they approached the 20 year mark they too began to feel dated and not wholly reliable.

So I went for a completely different solution.

First, a look at the final result 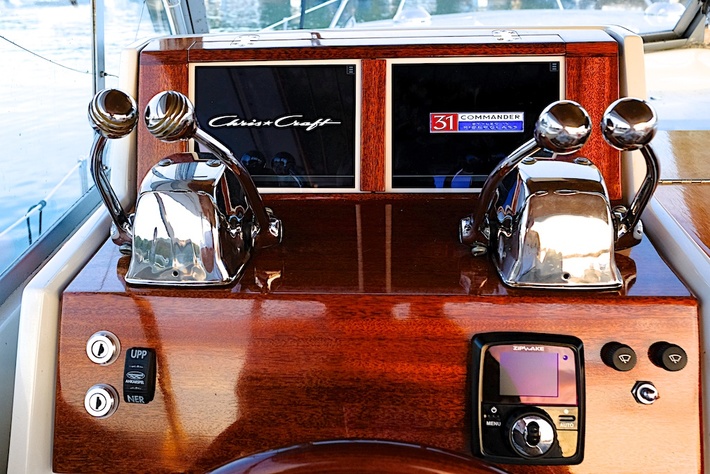 IPads in place. The instrument ”app” in the iPads can be programmed to accept your custom made ”welcome screens”… 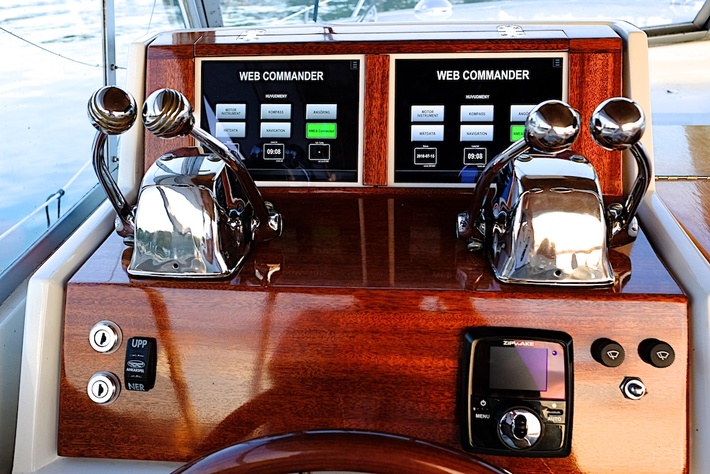 … as well as configure your own menu with touch buttons to access various sets of instruments. This is a sample of what the actual instruments look like. On the left hand iPad you have gauges for speed through water, speed over ground, log and depth readings. The right hand iPad displays the engine tach meters, oil pressure, water temperature and engine alarm indicators.  I have a number of other ”sets” of instrument displays, for example steering compass, fuel tank and water readings, trim tab status, etc. You can flip through them like browsing a book. Any of the iPads can show any data, so If one iPad fails you can still see the readings on the other. The iPads are of course prone to be stolen when the boat is unattended. For this reason I had the instrument dashboard made in such way that the iPads can quickly be removed and brought with you home. 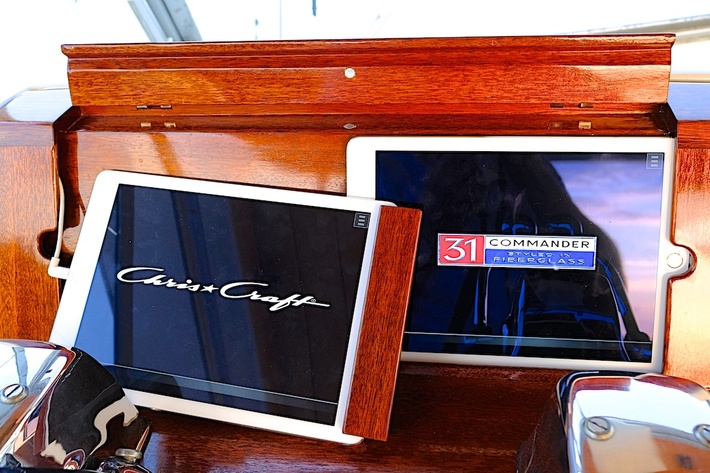 ...then I lift out and unplug the power cable to the first iPad... 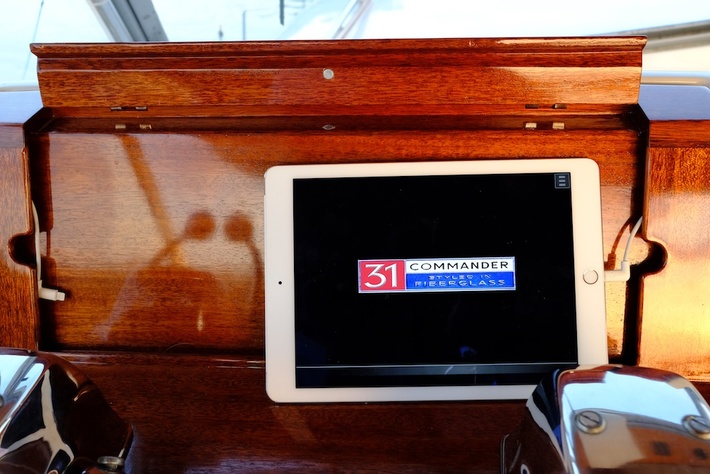 ...then I remove the second iPad. 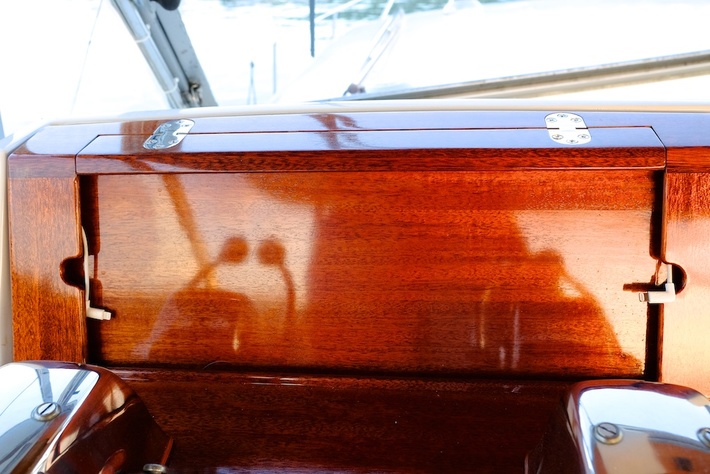 Finally I close the "lip" again. No instruments left for the thieves!

The technical side of this solution

For those of you who might feel tempted to do something similar, I will describe the fundamentals of how it works and which the prerequisites are.

How do I get the iPads to ”talk” to my engines and to my navigation tools?

The short answer is you need a NMEA 2000 network onboard. If you already have reasonably modern navigational instruments onboard chances are you already got one and if so you can expand that. If not you need one and it it not as complicated as it sounds. There are numerous guides to this on the internet so I won’t go in to it here. But once you have a NMEA 2000 network you need some other stuff.

How do I connect my engines to NMEA 2000 network?

Very modern engines might have this built in, but  if you are like me and have engines which are dated before the ”digital age” it can still be done. You need an Engine monitoring unit that can convert analog signals from your engine to digital NMEA 2000 lingo. I use a product called Actisense EMU-1.  You plug this product in to the NEMA 2000 network cable and route a simple copper cable from your existing tach, oil pressure and temperature meters to the EMU-1.

No, not directly. Ipads don’t ”talk” NMEA. They only talk WIFI (or Bluetooth). To enable this you need two things. You need a NMEA 2000 to internet Gateway. I use Maretron IPG100.  It is expensive but very reliable. I am sure there are others. Using a standard network cable from Radio Shack you connect the gateway to any WIFI router that can be power supplied by your 12V (or 24V) electrical system. Now the iPad can talk to the Wifi router, that can talk to the NMEA network, that talks to your Actisense EMU-1, that listens to your engine data. It sounds incredibly complicated when described in words like this but in real life you see none of this.

But I need special app in my iPad, right?

Yes you do. There are different solutions around but I use Maretron’s N2KView for mobile devices. It is free. You can even download it right now and see how it works with demo data. Warning! it is addictive! The app can be programmed to display virtually any type of instruments and data as long as it transmits it data over an NMEA 2000 network.

How about the navigational instruments?

To make the most of the solution above you will need navigational instruments that are NMEA 2000 enabled. In my case I use a Maretron solid state steering compass, a triducer (depth, speed, temp) and a GPS.  I even connected monitoring of my Zipwake Interceptors to the system. You can read more about my Zipwakes in this forum post.

Must i use iPads?

No, any Android device will work or even a PC or Mac.

You bet! there is almost no end to the things you can connect. The sky, or rather your bank account, is the limit!

Replies to This Discussion

Thats exactly what i was looking for.

Thanks so much John Mario! Thats really helpful.

I live in Sweden so I bought my unit from the Swedish distributor Odelco.

Permalink Reply by George Wastor on January 29, 2021 at 5:11pm
Oh I see!
Thank you very much for all the useful info Alarik.

Permalink Reply by Jason Bock on January 30, 2021 at 10:58am
I am a purist, the classic gages combined with the lines of our commanders were what attracted me to begin with.

That said, WOW. Just beautifully done. Right down to the helm reimagination and execution.

If my 327's ever give up and I go with a modern engine, I would be very inclined to replicate what you've done. Well done sir

You mention that you plug the EMU-1 to the NEMA 2000 network cable and route a simple copper cable from your existing tach, oil pressure and temperature meters to the EMU-1.

Did you use an NGT-1 in order to config the EMU-1? or is the EMU-1 out of the box with its factory settings pre-configured for the Commander gauges?

I like the idea of the NMEA2k to internet gateway (and wifi) a lot more than the NGT-1 USB. So I m thinking that paying $200 for an NGT-1 in order to use it just one time to config the EMU-1 and then never use it again, is a bit too much. Is there any way to config the EMU-1 other than using an NGT-1?

Is it possible to access and config the EMU-1 through the Maretron IPG100 without using and NGT-1? (or any other internet gateway e.g. I m planning to use NMEA 2000 Wi-Fi Gateway YDWG-02

Thank you so much for your help

Beautiful work and gives me ideas for replacing my gauges on my 36' Sports Cruiser.

Thank you and best of luck with your project! 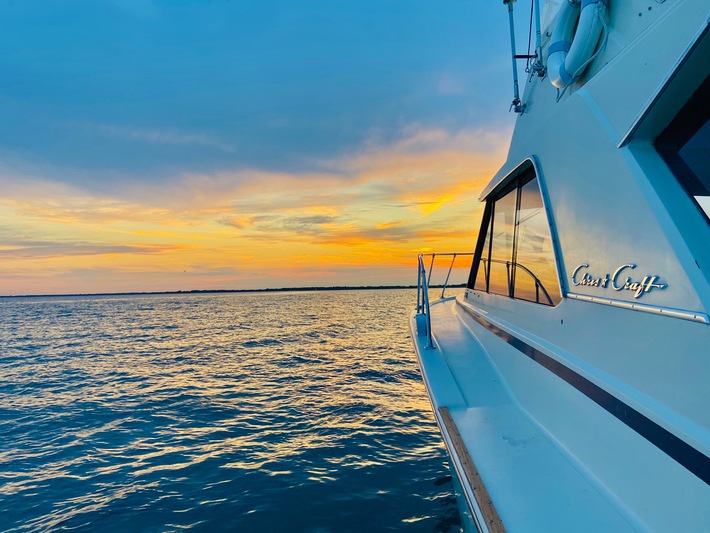