For those who don't know the story of how Patty & I became the owners of our current 47, here's a brief recap. We had always wanted a 47, but only the model with a single aft stateroom and Cummins V-8 diesels. This version is fairly rare and not seen on the market often. Chris only built 18 of this FAG model and most did not have the Cummins engines. While attending the 2008 club rendezvous in Algonac we spotted a real pretty 47, and the name on the stern was "Paddy Wagon", almost the same as our "Patty Wagon". After boarding and meeting the owner and fellow club member, Duke Norton, we found a single aft stateroom !  When I inquired as to the engines, Cummins  VT8-370M ! Bingo ! It must be Karma !! I told Duke that with all his grandchildren, this boat was too small, that he should sell it to us and buy a bigger Commander. He smiled, but declined my offer, so I left my business card. About a year later, Duke decided to sell the boat, found my business card, and called me. We ultimately cooked up a deal involving Duke taking our 38 and cash for the 47. At the last moment, the survey revealed a lot of oil in the bilge that Duke was not aware of, and I walked. He was a gentleman and understood. I was now out of the mood to buy a boat and our 38 looked better than ever, even though we had already owned it for 19 years. During our aborted transaction Duke & Dorothy, Patty & I had become friends. Later Duke called me to let me know they found the source of the oil, a leaking pan gasket on the port engine. He had called in Cummins to fix it, and while they were there he had them do the starboard engine as well. After the repair, he had a crew really clean the bilge. I was still out of the mood for a new boat, but I helped Duke write a new for sale ad for the boat. Fast  forward to early fall of 2009, Duke called me with a deal I couldn't pass up, so In Oct. 2009 Patty & I owned the 47, which we kept in winter inside heated storage in St. Clair Shores, MI. The plan was to run it to our home port, Michigan City, In in the spring of 2010. That spring I had a little bout with Legionnaires Disease that resulted in 3 club members, Dave DiSesa, Jack Bonczyk, & JW Holcomb bringing the boat back to MC for us.
Since our first meeting, we have remained good friends with Duke & Dorothy. We see them at least once a year for lunch or dinner when we are on the east coast of Florida. OK, here's where the story take a neat turn --- earlier this year club member & fellow 47 owner Jerome Rahrig broke one of his trim tab actuators and was wondering if any club member had a spare. Well, thanks to friend Greg Gajcak donating a couple of them to the "Morland Stash" of Commander parts I had one which was quickly donated to the cause of "Floating, Functioning 47's" :-)   I didn't think anything of it, it's just what we do here at CCCC. About a week ago, I got a private e-mail from Duke. See below ------

On Sun, Jun 23, 2013 at 6:48 PM, Duke Norton wrote:
Dick,
I was just fooling around on the CCCC website and I noticed that you had some recent communications with a gentleman by the name of Jerome Rahrig. In 1987 or thereabout, I sold my 1927 22' Chris Craft Cadet named the "Dorothy Ann" to a Jerome Rahrig from the Coldwater, MI area. It must be the same man. He did not change the name of the boat for it had a unique history and won many awards at prior antique boat shows and he subsequently entered it in many other antique boat shows where it won additional honors.
The unique history that I referred to happened in 1985 at the Antique Boat Show in Charlevoix, MI where Dorothy and I had entered our boat. After the show, we took the boat out of the water and back to our motel which was atop a bluff overlooking Lake Michigan and the Pine River entrance to Lake Charlevoix. The Awards Presentation Ceremony was to take place at the Charlevoix Yacht Club forty five minutes later. I backed the boat trailer into an apparently level parking spot adjacent to the Pine River. I applied the car's parking brakes and then unhitched the trailer. While Dorothy and I were wiping down the hull, the boat and trailer started to roll and went over the sixty degree embankment heading for the Pine River. Fortunately, it came to rest on a concrete walkway adjacent to the river. Amazingly the boat suffered no damage at all but the trailer's dolly wheel was slightly bent as it served as a brake going down the steep hill and saving the boat. We hired two local wrecker trucks to winch the boat and trailer back up the hill and safely attached it to our car. (see attached photos) We missed the Awards Ceremony so the committee came to the cocktail bar of our motel, where all the other contestants had gathered, and presented the "Best of Show" award to the "Dorothy Ann ". This whole episode was photographed and written up in a subsequent issue of Antique Boating.
If you communicate with Mr. Rahrig, please give him our regards.
Duke
===============================================================
I'm showing the pictures below. Really cool story, and with the exception of JW Holcomb, the reason I know all these nice people and consider them friends is the Commander Club making the world smaller for our members !  COOL !! 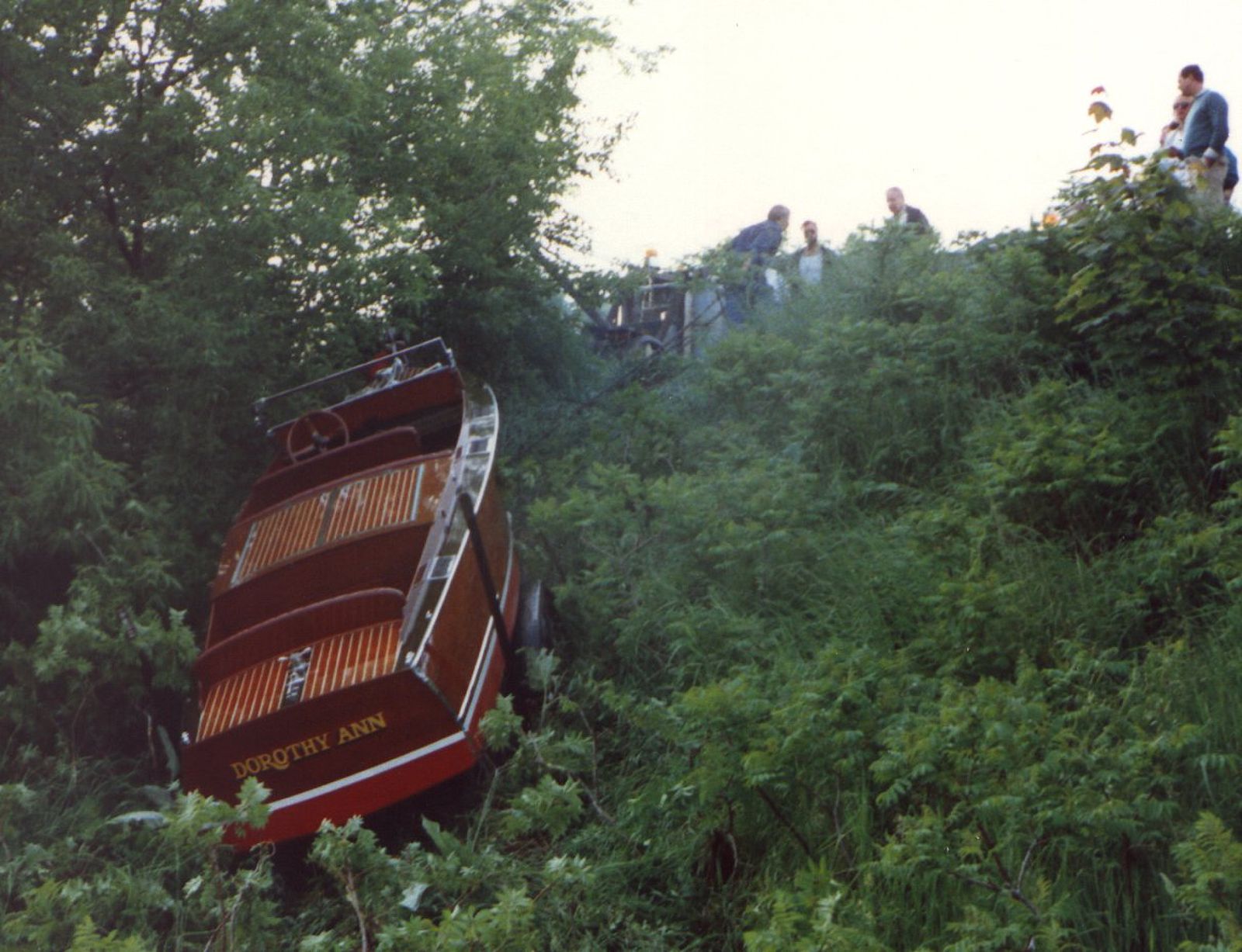 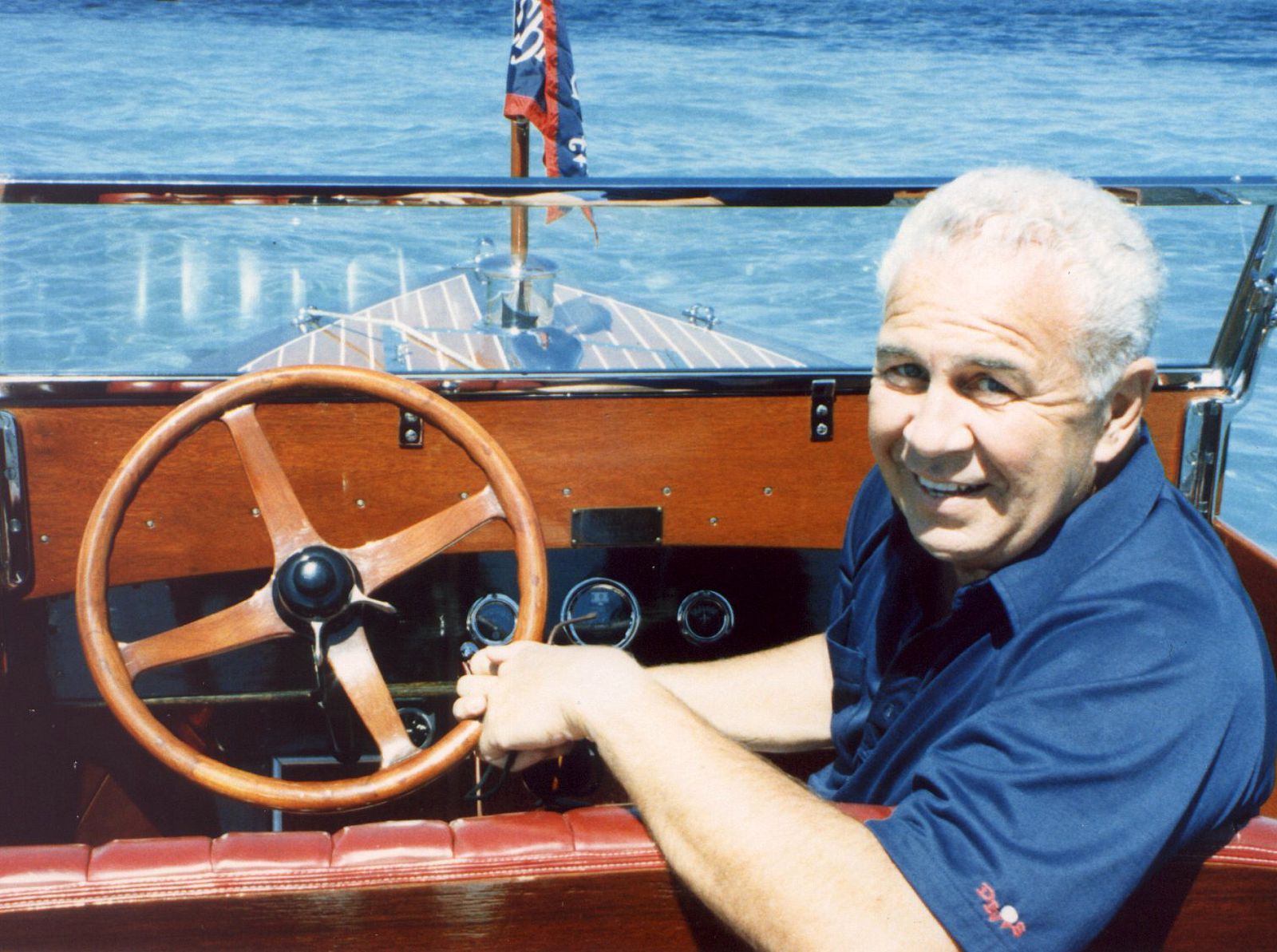 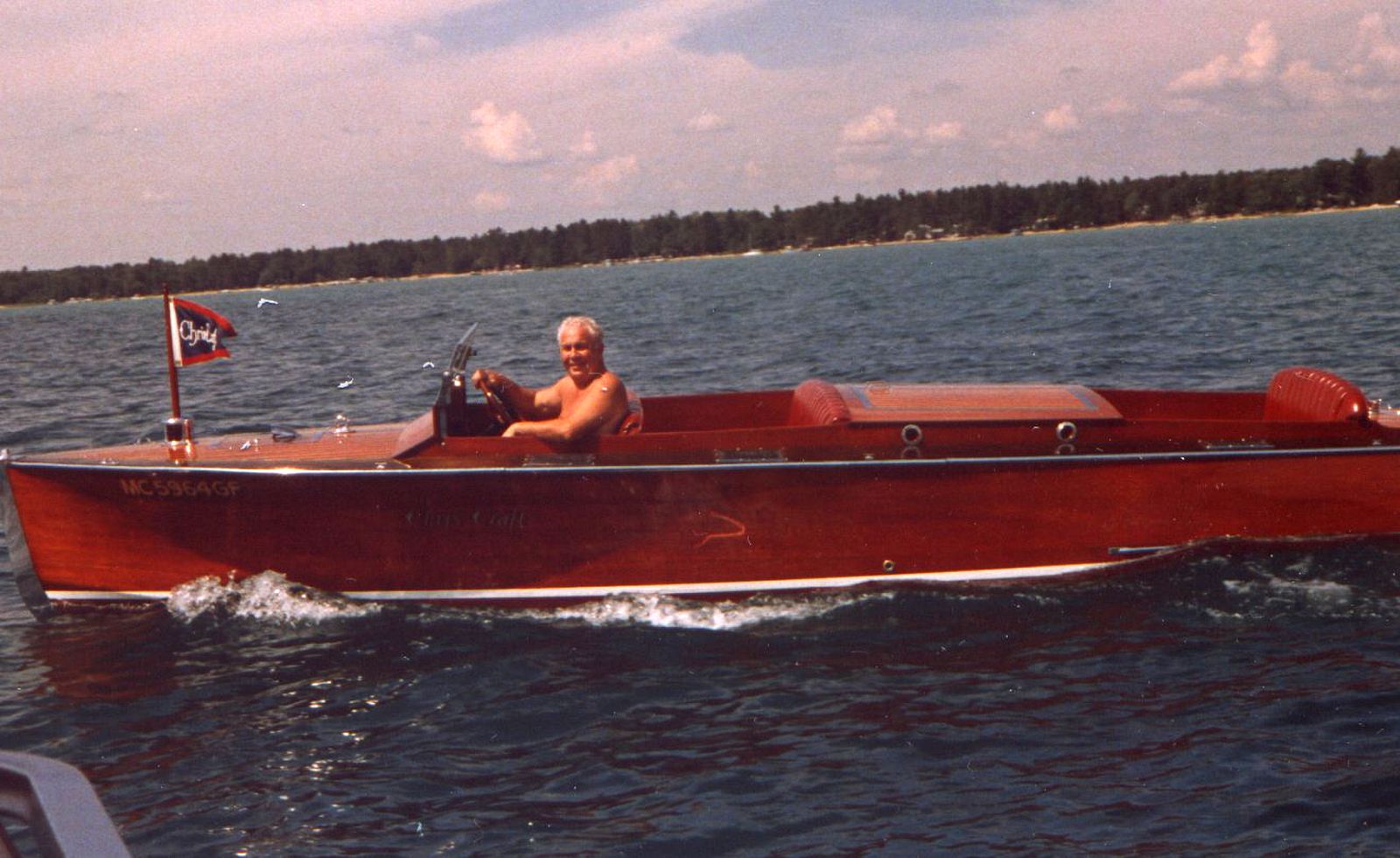