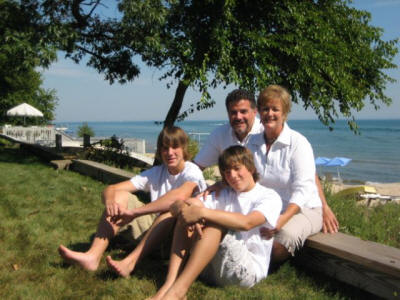 As a toddler, Chris Benedict’s name for his grandfather was “Bompa.” His grandparents Harvey and Kathryn Amoe were the original owners of “BOMPA BOAT.” The boat was manufactured in Holland, Michigan. 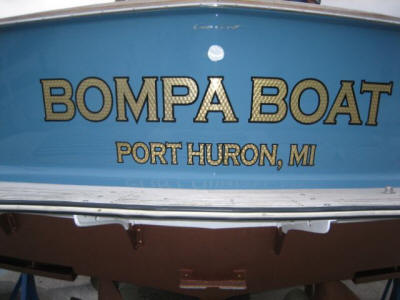 Chris recounts his first time on the boat: “In the summer of '69, at the age of 3 (almost 4), I joined my grandparents in the maiden voyage from Holland (lower Lake Michigan), through the Straights of Mackinac, arriving in Port Huron at the southern extreme of Lake Huron.” Chris reports that the boat has always resided in Port Huron with the exception of one year in the mid 70's when his grandparents loaded it on a semi and took it to Fort Piece, Florida for a year.

His grandparents retired early and lived two doors from him. “I became the boat nanny, mechanic, etc at very young age. I spent many springs polishing that hull, painting the underside and tuning engines,” recalls Chris.

Chris was in his early 20’s when his grandparents expired and he asked his mother & father Donna and Miles Benedict and his uncle Harvey if they would keep the boat, in hopes that some day he would be able to afford it.

In the summer of 1989 his girlfriend proposed marriage to him on BOMPA BOAT (at least that is his story). He accepted and history continues to be made. Beth has also boated her entire life. They spent many days on the same rivers, lake and beaches long before they ever met. “She loves the Commander as much as I do, so keeping the boat was a must, it's how we grew up,” says Chris. With the hull extremely oxidized and gel coat rubbed through in several places, a paint job was long overdue. In the fall of 2010 Chris left the boat with Tony and Marsha Shepherd of T & M Marine, Inc. in Sarnia, Ontario to begin the restoration project. Over the winter they painted from the deck rail to the keel. The hull was sprayed in Awlgrip Stars & Stripes Blue, basically a perfect match to the original color and some of the chrome was restored. Lettering was done in gold leaf by Seamaid Boat Lettering Jensen Beach, Florida. 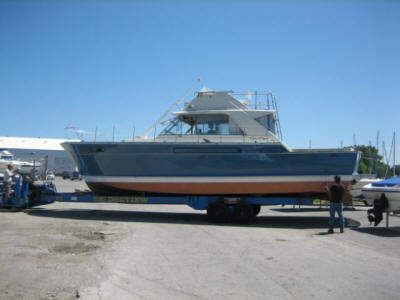 Chris and Beth will continue to use the boat in the summer returning it to T & M soon for some top-side painting. The interior will be a slow work-in-process as will the teak restoration on the exterior. Fuel tanks and back deck were removed this past fall, 2011. New tanks matching the original are being fabricated in aluminum by Kehrig Mfg in Chesterfield, MI and will be reinstalled in the spring. The original Ford 427s were running pretty well, however leaking a little oil.

In the fall 2011, Chris dropped the engines with Total Performance, Clinton Township, MI for overhaul. Chris points out, “the guys that own Total Performance were engine engineers at Ford Motor Company at the time the 427s were produced.” Chris also removed the Kohler 6.5kw generator and delivered it to Michigan Generator in Dearborn Heights, Michigan for overhaul, he wanted the bearings/seals replaced for oil dripping.

Chris is looking forward to getting her back together this spring. “It has been a long time since I could go boating without spending excessive time in the bilge…..” Chris laments, “but, wait a minute…I’m preaching to the choir.” Chris looks forward to continuing his participation with the locals in metro Detroit along with all of us online. “We really enjoy knowing you folks. Smooth Sailing!” says Chris.