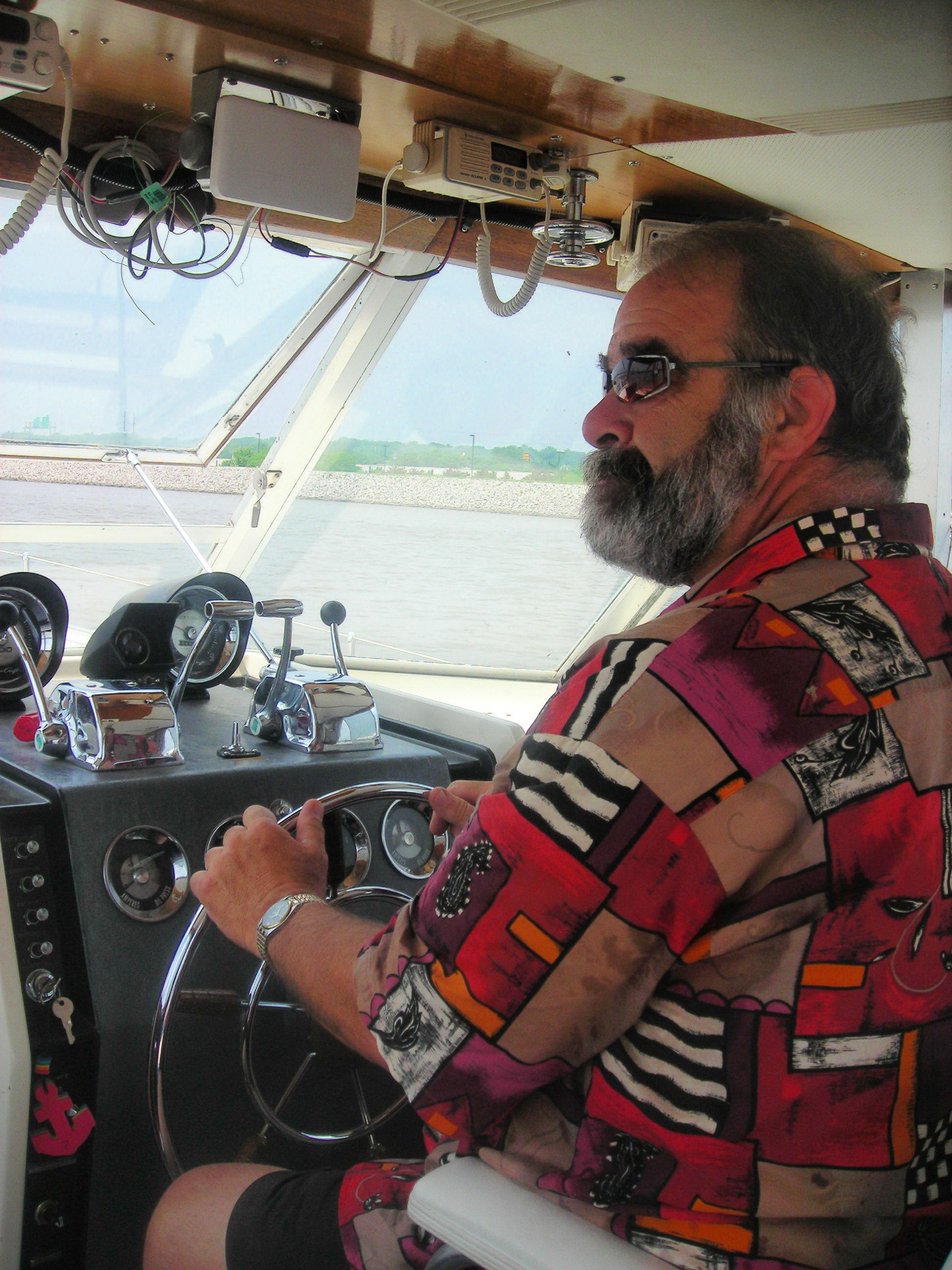 Growing up just 8 blocks from the Mississippi River, it was a natural for John Duda to be interested in boats at an early age.  His parents would let him ride his bike to the local boat ramp  where he could build sand castles,  build and sail pirate ships (made with sticks as wood planks and candy wrappers as sails) and wait for the “tidal waves”  created by the tow boats and barges passing by.  What young boy hasn't wanted to play "Pirate"?  John would ride home and draw pictures of his favorite boats and proudly show Mom and Dad.  Little did he know the significance of these drawing years later.

John has two older brothers, Jim and Doug, and both played in a Rock & Roll band when Rock was still wet behind the ears.  They were pretty popular with the co-eds and the parents of one of Doug’s girls friends gave their old runabout to John's family.  John and his brother, Jim, went to work on that boat and painted it to match Jim’s 1965 Delta 88, Aztec Gold.  John was about 11 years old, at that time, and this experience began his lifelong love affair with boats.

John would walk through a local “big boat” yard and stare at the big cruisers. Some were wood, Some were fiberglass.  The boats that drew his attention? Chris Crafts.  John’s first boat was a single engine 1977 Chis Craft.  He is amazed he survived some of those boating experiences!  The next adventure was a Chris Craft utility 17'. John stripped, sanded, stained, varnished and polished everything on the boat.  It was like working on a very large Steinway piano and his fear of wood boats disappeared.  John gained a deeper respect for larger boats when he purchased a 32' Chris Craft Cavalier.  Next, a 27' SeaRay Sundancer.  John’s friend, Vicky, had a bout with skin cancer and since she couldn't get out of the sun while on the Sea Ray, it was time for a change.

In Search Of A Commander

John started shopping.  He found a Roamer, that was gutted, and needed a lot of work on the steel hull.  Nope. The search continued.  One day, after having dinner at a local marina, John saw the “Soaring Sun”, a 1970 second generation 38’ Commander Sedan with a bridge and it was For Sale.  Right alongside was the “RNR”, a 1967 38’ Commander Sedan and it was For Sale!  Remember those pictures John drew as a young child?  They matched the silhouette of the “RNR”, perfectly!!!   John spoke with Terry, the father of the owner of the “RNR”, and he listed the many mechanical upgrades the “RNR” had under gone.  Terry’s daughter owned the “RNR” and John knew that a father would never allow his daughter to have a poorly running boat on the Mississippi River, so he knew it must run well!! 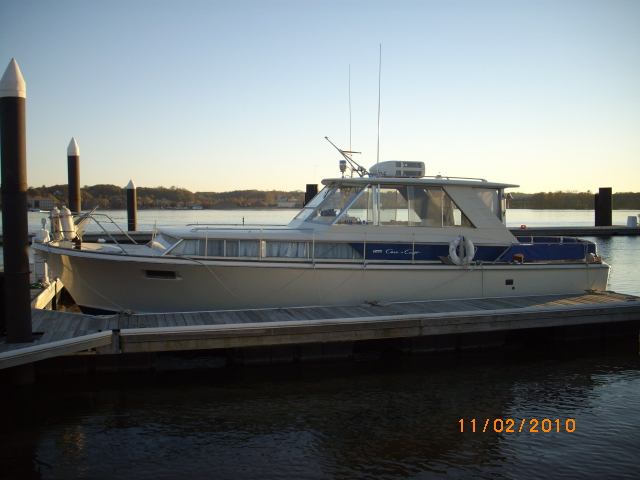 The day of the sea trial was gray and overcast.  The river was having an unusual fall flood, and the water was running high and fast.  The captain made that big boat do things in tight quarters that John could not do with the smaller Sea Ray, even with twins engines.  The Commander was almost as impressive as how it maneuvered.  That trip, in bad weather, certainly made John aware of why the boat line was named Commander!   With little more than a hand shake the deal was made.   Finally, John has his Commander. 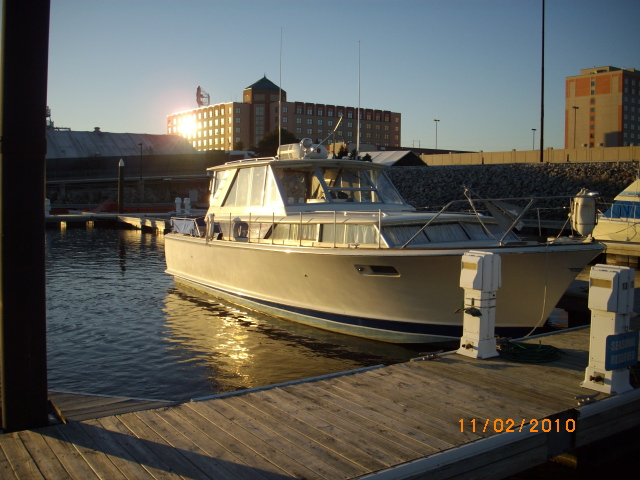 Owning his Commander has opened up an entirely new world of entertaining. The large cabin allows him to cruise when the weather is less than ideal because everyone fits comfortably in the cabin.

John has been a piano technician for many colleges, concert halls, and other clients in the Midwest.  He also sings in a Jazz quartet called the Perfect 5th.  Since his Commander, Camptown's Lady, has a generator, his jazz quartet can power up  their instruments and give concerts while anchored out in the local back water.  They draw a quite crowd!!!

Camptown's Lady in port at sunset.

John’s home port is Isle Of Capri Marina, on the Mississippi River in Bettendorf, Iowa.  He and his fellow 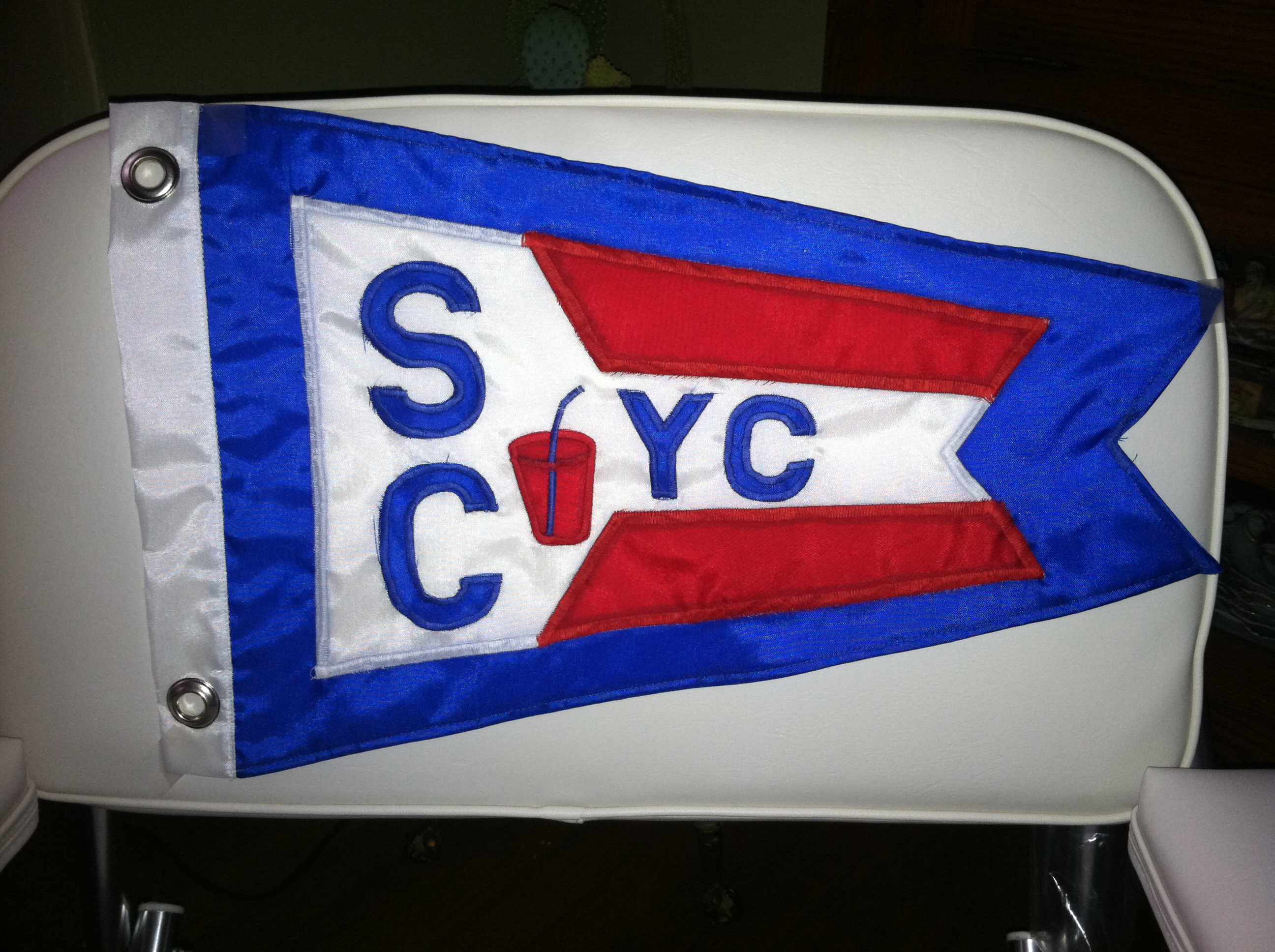 boaters were looking to name their own Yacht Club.  For the Isle Of Capri, the obvious monogram would be ICYC, sounding like “Icy- Whycee”, but that was deemed too boring.   At one of the Dock Luau's, John spilled his drink.  His sister, Mima, had given him a few "Sippy Cups" and they were on board.  He decided to put his next cocktail into one of the sippy cups and was greeted with a lot of finger points and giggles from his dock mates.  BUT, when someone else knocked over John’s drink, and nothing spilled,  everyone headed to John’s boat for the rest of the of sippy cups.  Ah Ha!!!!   John contacted a flag (pennant) maker and the "Sippee-Cup-Yacht-Club" was formed.

The Philosophy Of Being A Commander Owner

John has gained a much deeper understanding of what being a true boater is all about.  He understood having a boat as a hobby, but those that said they felt boating  was a “Lifestyle”, perplexed him.  What does that mean?  A “lifestyle”?   Since he has become a Commander owner, he now understands boating as a lifestyle.  Commander owners are people that take great pride in their boats, maintain their own 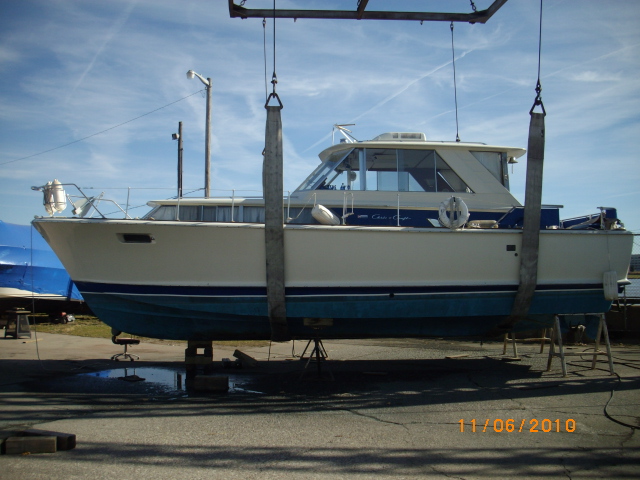 boats and experience their boats.   Now that John owns a Commander, he has become more involved in the maintenance of his own boat. It gives him great pride of ownership, as well as, a certain sense of accomplishment when a problem is conquered.  John says  “We, as Commander owners, are the caretakers of these boats.  These boats are close to 50 years old and look how many are still around.  How many 50 year old Sea rays do you see around!!!”

A Word About The Commander Club

John is very aware of the value of the Chris Craft Commander web site, more now than ever.  The wealth of experience  and knowledge people are willing to share, is impressive and invaluable.

John is looking forward to his Spring launch which is scheduled for April Fool’s Day.