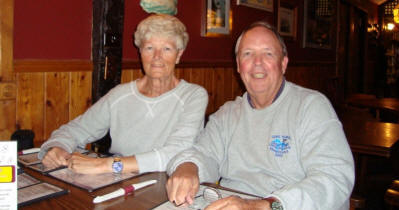 SCAMPI is docked at the Duncan Bay Boat Club, Cheboygan, MI. Sherry and Hart live aboard and cruise the northern Great Lakes during the summer months. They are active in the Great Lakes Cruising Club.

The Hardings have been married 48 years and have owned a variety of boats as time and finances allowed. SCAMPI is in pristine condition and is professionally maintained by Walstrom Marine in Cheboygan.

The name SCAMPI was chosen after they purchased a 28' Carver Mariner in 1972. The boat was slow but had large interior spaces and great living spaces. However it was not "sea-friendly" to Lake Michigan's large waves which they encountered on a regular and unpredictable basis off the Chicago shoreline. At times they had concerns about rolling over and ending up on the bottom. For all these reasons and the fact that they wanted a unique name, the Hardings chose SCAMPI and have used the name on their boats ever since. When asked how he got interested in Commanders, Hart replied, “While I was living in Flint, Michigan my father took me to the Chris Craft factory in Algonac and as I looked at those beautiful boats I wondered if I could ever own one! Fast forward to 1990; both our daughters were through college and we wanted a bigger boat for cruising the northern waters and having fun on Lake Erie. We tried to buy several 35' Chris Craft Sea Skiffs, but none of their wood hulls could pass a survey. With the help of Toledo Beach Marina we found and purchased a 1980 33' Chris Craft Catalina which we used to fish and cruise Lake Erie and Lake Huron. When I retired in 1996 we started looking for a larger boat which we could cruise and live aboard for the summers in the northern great lakes.” 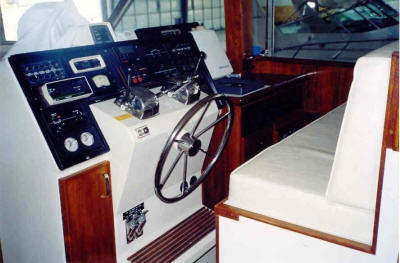 “In 1999 at the Great Lakes Cruising Club Rendezvous at Presque Isle Michigan we spotted, admired, and fell in love with our present boat, a 45' Chris Craft Triple Cabin Model 451 Commander with a fly bridge in pristine condition. The bad news was that the owner, John Lobbezoo was not interested in selling the boat. Our search began and for the next four years we looked up and down the Eastern seaboard and the great lakes for triple cabin 451 Commanders. We even went to Newport News and checked the archives for the "build records" and the factory specifications for this model. We found several of this model and all but one were in poor condition due to neglect or stupidity in maintenance. (Toe-rails and hand rails painted with Lucite,etc.). We found one boat in Florida that could fit our needs but it needed 30K to 50K in repairs and updating to be suitable and safe to bring it North. Also if the boat stayed in Florida more than 90 days we were told we would have to pay Florida taxes in addition to the repair cost at an unknown yard and the cost of bringing the boat to Michigan.....we passed.” 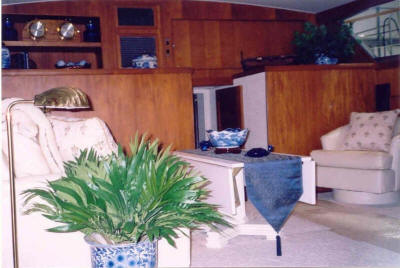 “As we were looking for alternative boats; 53 Hatteras, 42 Commander, 46/50 Commanders, etc. we were notified that the 45 that we had originally wanted was for sale and we bought it within 15 minutes of looking at it again in September of 2004.”

Sherry and Hart are the third owners of the boat. The original owners were Alexander & Eileen Kaminsky who purchased the boat from Rodi Chris Craft in Miami, Florida in January of 1979. They named the boat JUDA. The second owners were John & Mary Beth Lobbezoo who purchased the boat in April of 1983. They named the boat MARY BETH and docked it at Spring Lake, Michigan. In 1999 John renamed the boat ALWAYS. ( John Lobbezoo & Bobbi Johnson currently own a 55' Chris Craft Commander named ANDRALISS ). The Mariner's Museum Library in Newport News, Virginia has a copy of Motor Boating & Sailing's Performance Test on this Model 451 conducted in 1976. 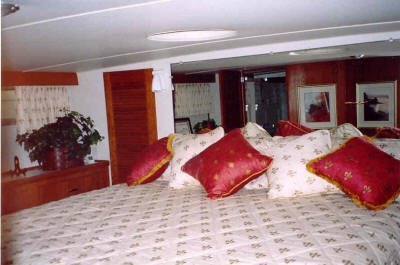 Hart wrote “We enjoy being members of the Commander Club and the exchange of information and ideas that takes place as a result. One of these years when time and geography permit we hope to attend a rendezvous. Thanks to everyone in the club who works to remember, preserve, and help everyone enjoy one of boating's historic icons.”

Hart and Sherry are still living the good life and having fun aboard SCAMPI!