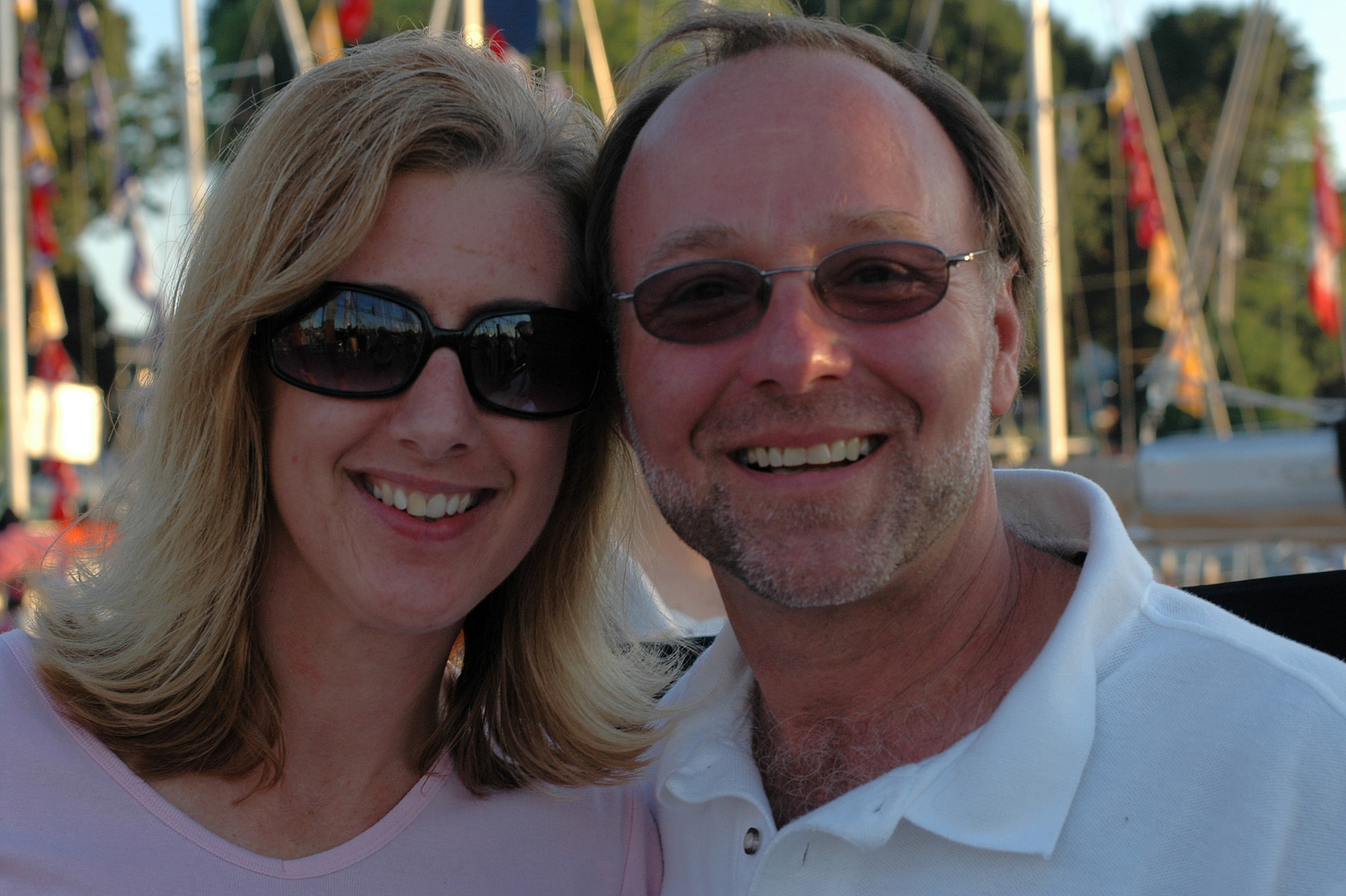 Bryan and Julie Huntley are the proud owners of “On Time”, a 1964 38 Commander Fly Bridge Express. The club’s Executive Committee selected this beautiful boat as the “Flagship” for our 50/15 year Anniversary Rendezvous in Huron, Ohio in early August. 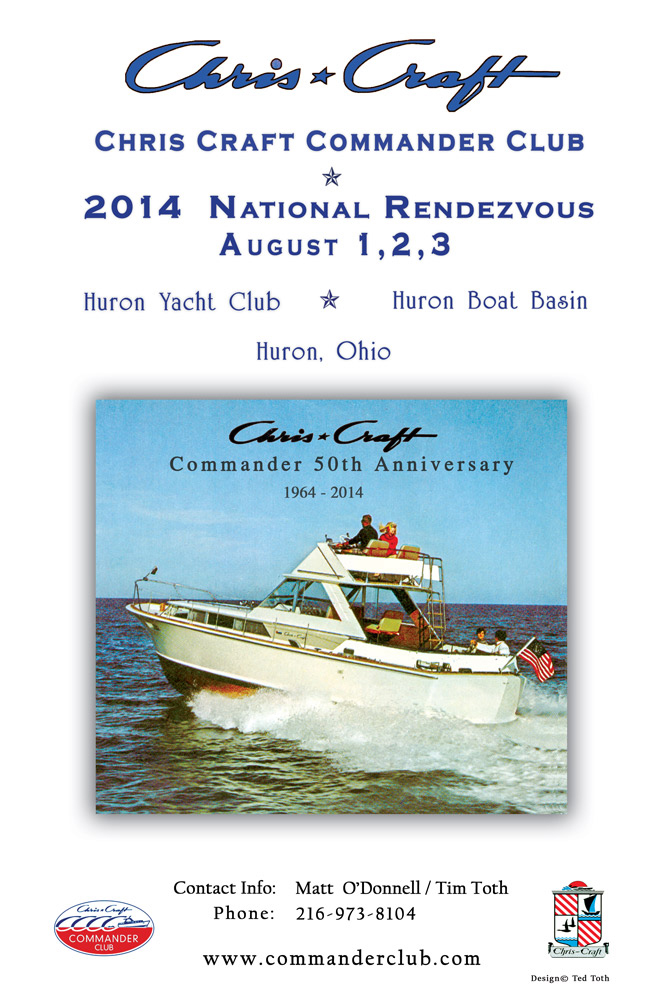 On Time’s hull number is #41, making it one of the oldest boats in the club. Hull #41 was delivered to Clayton NY on 7/7/1964, just in time for the annual Clayton, NY boat show. She was a dealer demo and most assuredly was the talk of the show, as these boats were a bit of a surprise when they were first introduced.

Bryan & Julie began boating as racing sailors, and in fact their first date was on a rail down beat to windward in an impromptu race, Julie was on the helm and Bryan was the foredeck muscle. Bryan still has not heard the last of that first date! They married and continued racing sailboats, both in MORC (Midget Ocean Racing Club) and PHRF (Performance Handicap Racing Fleet). Bryan ultimately introduced Julie to the pleasures of power boats, and they started with a series of ‘woodies’, all of which they rehabbed in one fashion or another. The last woody prior to On Time was a totally restored 1958 35 foot Connie. About this time Julie wanted less teak & varnish to maintain. Being the gentleman he is, Bryan located what seemed like a nice 38 Fly Bridge Express listed in the BoatUS newsletter classified section. In 2004, they purchased the future On Time, which was located in Lake Huron. As with most used boat purchases, she was represented to be in fine shape. The maiden voyage proved otherwise.

Bryan & Julie left on their maiden voyage from the northern part of Lake St Clair to their home port, Sandusky, OH, normally a 8-9 hour run. As they reversed to leave their slip, the first thing that happened was the shaft pulled right out of the transmission coupling. A few hours later, the shaft was back in and they left again, only to be later delayed about 3 hours because of hydroplane races in the Detroit River. This delay meant finishing the voyage after sundown. This is when they 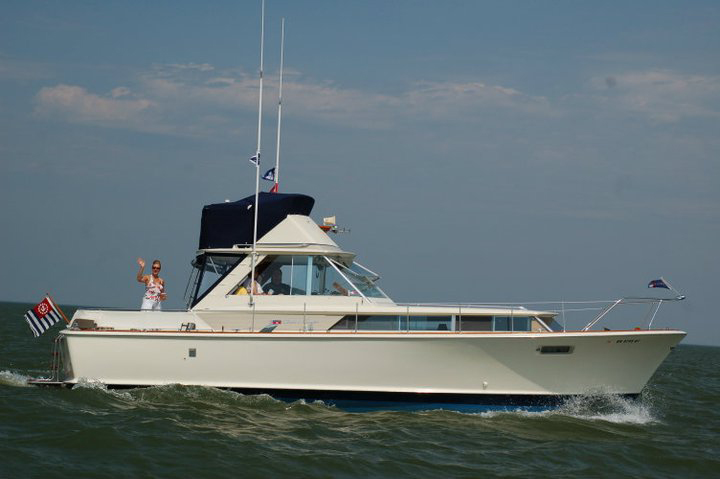 discovered the running lights didn’t work! Somehow Bryan located & affixed some stick-on running lights!  Another system not working was the head, but in the spirit of racing sailors everywhere, the oaken bucket sufficed!

Somewhat later they pulled into a marina in a pretty rough area of Detroit for fuel, and discovered when firing up the engines for departure that the port engine was not pumping water. This meant spending an uneasy night at this marina, with a plan to leave really early. In the morning, after a couple of hours and a new impeller later, On Time finally left for home and completed her maiden voyage.

When they got the boat home, Bryan told Julie that the first two orders of business were to fix the head and to remove the name. The head got a new macerator pump and then three evenings were spent taking off the old name. The name on the boat was MONEYPIT, and it was really large on the transom. The irony was that the Huntley’s knew all boats are money pits. They just didn’t need to be reminded every time they stepped aboard. Now the complete restoration could begin. 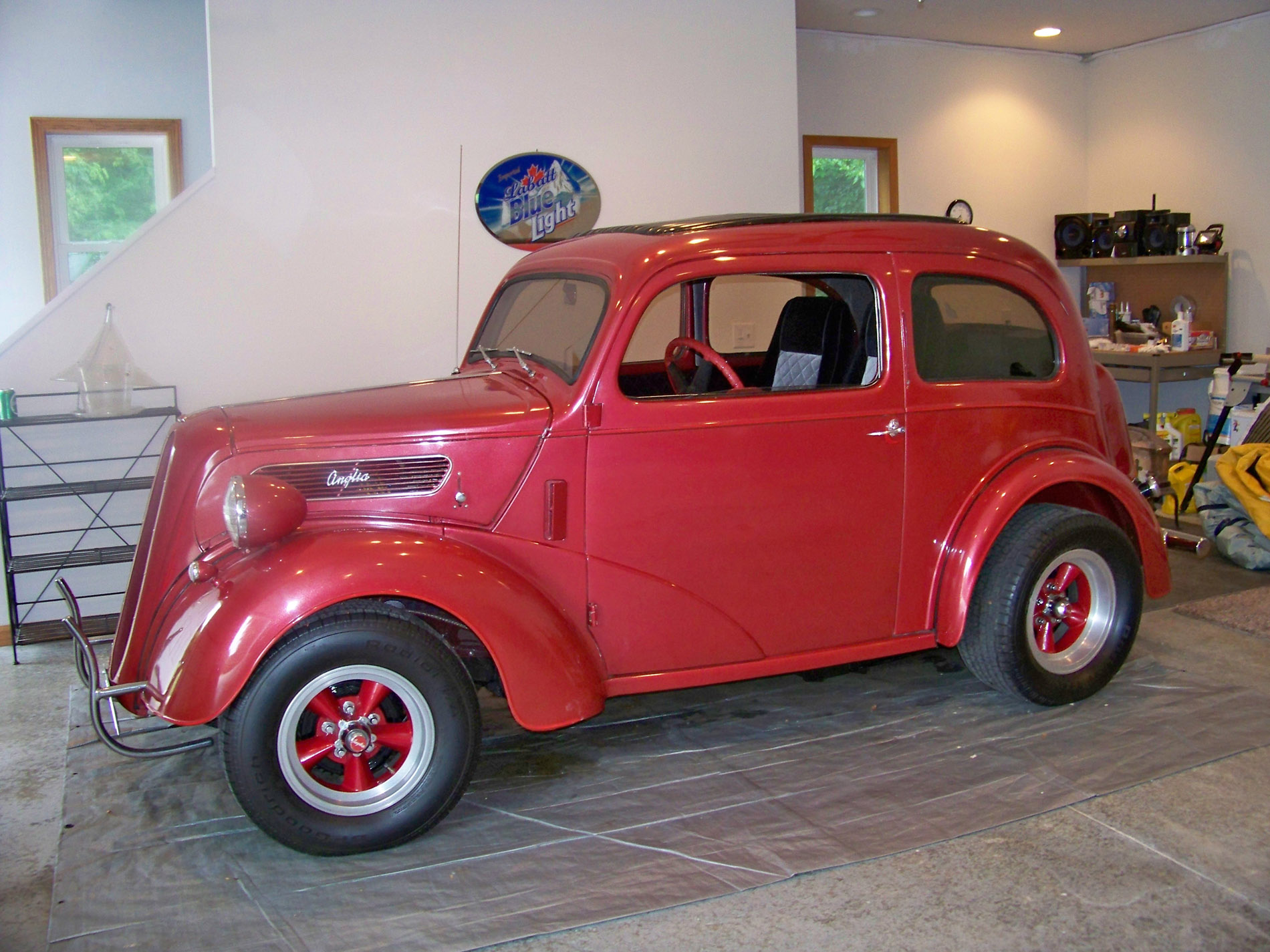 Bryan is uniquely qualified to handle all these problems plus the upcoming Commander restoration. He’s been a gearhead all his life. An ex-drag racer who still has 3 ‘hot rods’ in his garage, AKA Bryan’s “Toy Hut”.

One of these toys is slick little 1951 Anglia hot rod with a monster motor. 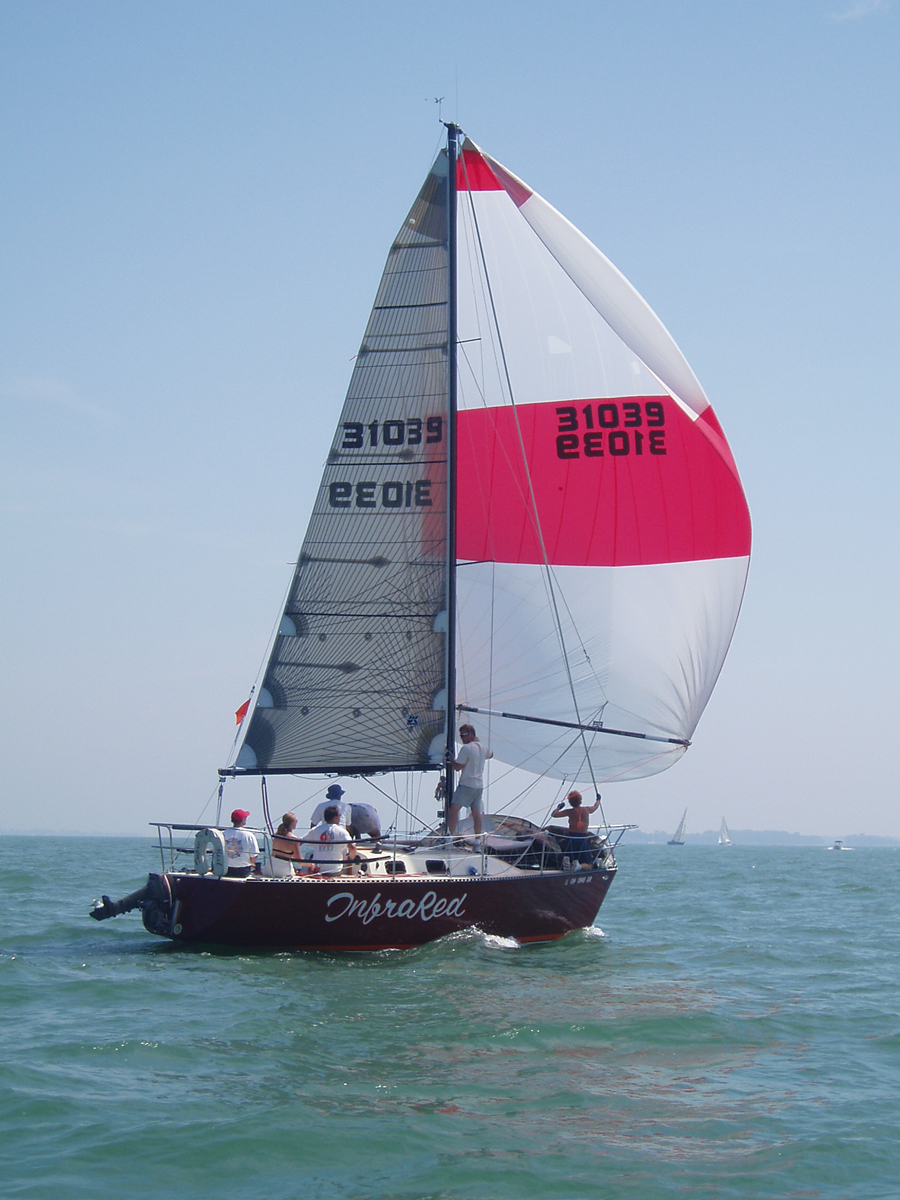 In addition to acquiring and embarking on a major restoration of the Commander, Bryan & Julie kept a Kelley 28 racing sailboat named ‘Infra Red’. Bryan says: “Now that we have a nice cushy Chris-Craft Commander, I can hardly ever get her out racing with me on the “Infra Red”, but that is fine. We have a great time with our 38 Commander and have met some wonderful people in our travels”.

One of the unique features of On Time is her engines, which are Chrysler 440’s. The original engines were the Lincoln 431’s which have been replaced with the 440 Chryslers. These engines were used by Chris-Craft in the larger Commanders after an engine plant fire in 1965 left Chris without an engine building capacity. Most members have never even seen a Commander with the big block Chryslers.

Bryan & Julie are empty nesters. One of their grown sons is an actor, the other a civil engineer. Julie loves to workout at the gym and takes care of her cats and feeds the birds. She is also quite the nature lover.

Bryan is also into running, plus maintaining his floating sail and power fleet, along with the four wheeled fleet. In his spare time :) , Bryan owns and is CEO of Peerless 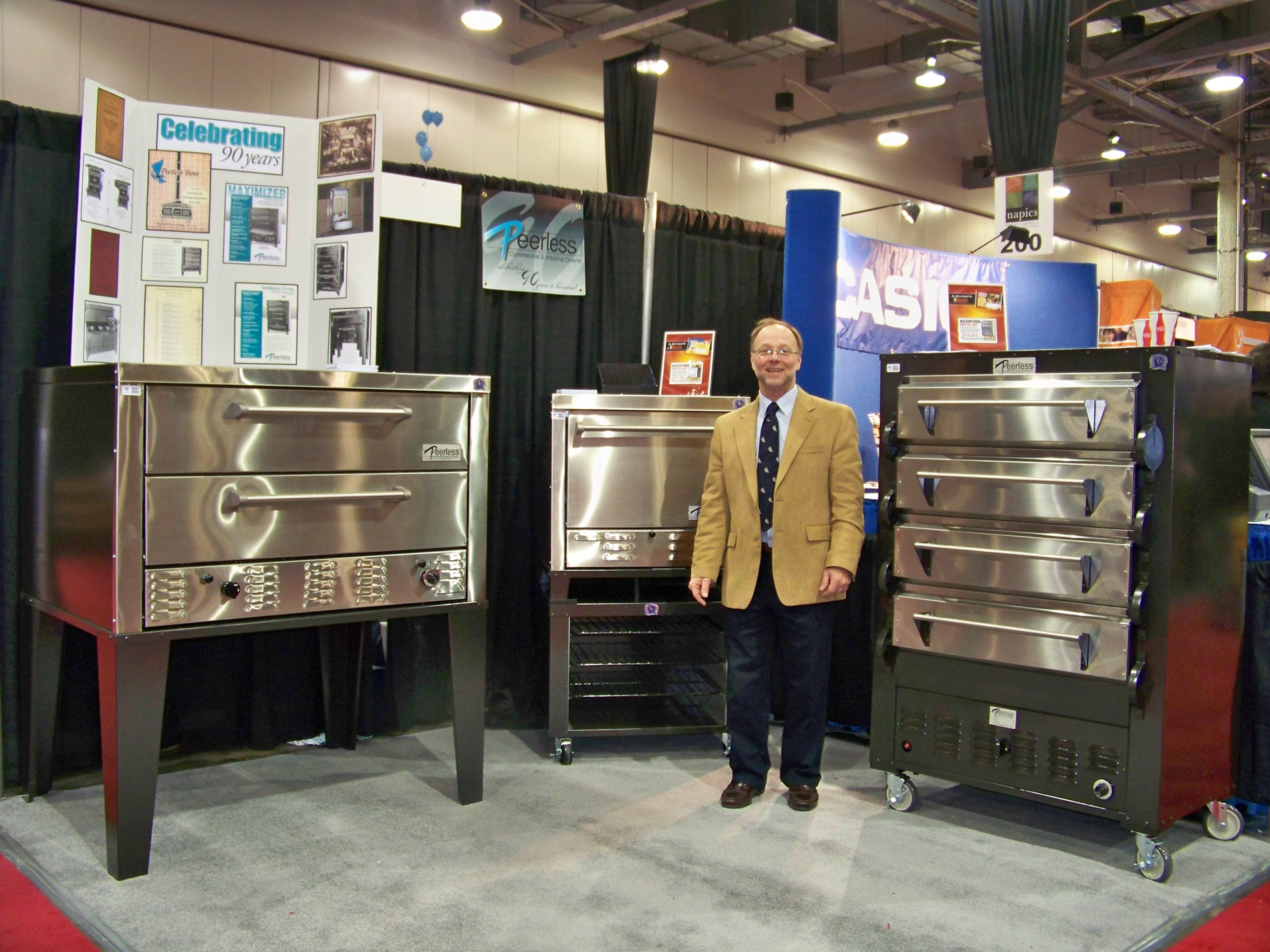 Stove & Mfg. Company, a manufacturer of commercial ovens. One of their premier products is pizza ovens!! Bryan and his father developed and patented a high-speed InfraRed cooker that has helped revolutionize the cooking industry.

At some point, during the restoration of On Time, Bryan was unable to locate a source for the rub rail vinyl insert found on 38 & 31 Commanders. “No problem! I’ll just pay for the fabrication of a die, plus have 2,000 feet of this stuff made! That will satisfy my needs, and I’ll offer it at cost to fellow Commander owners!” Bryan still has some of this stuff in stock for the next Commander owner who needs it. 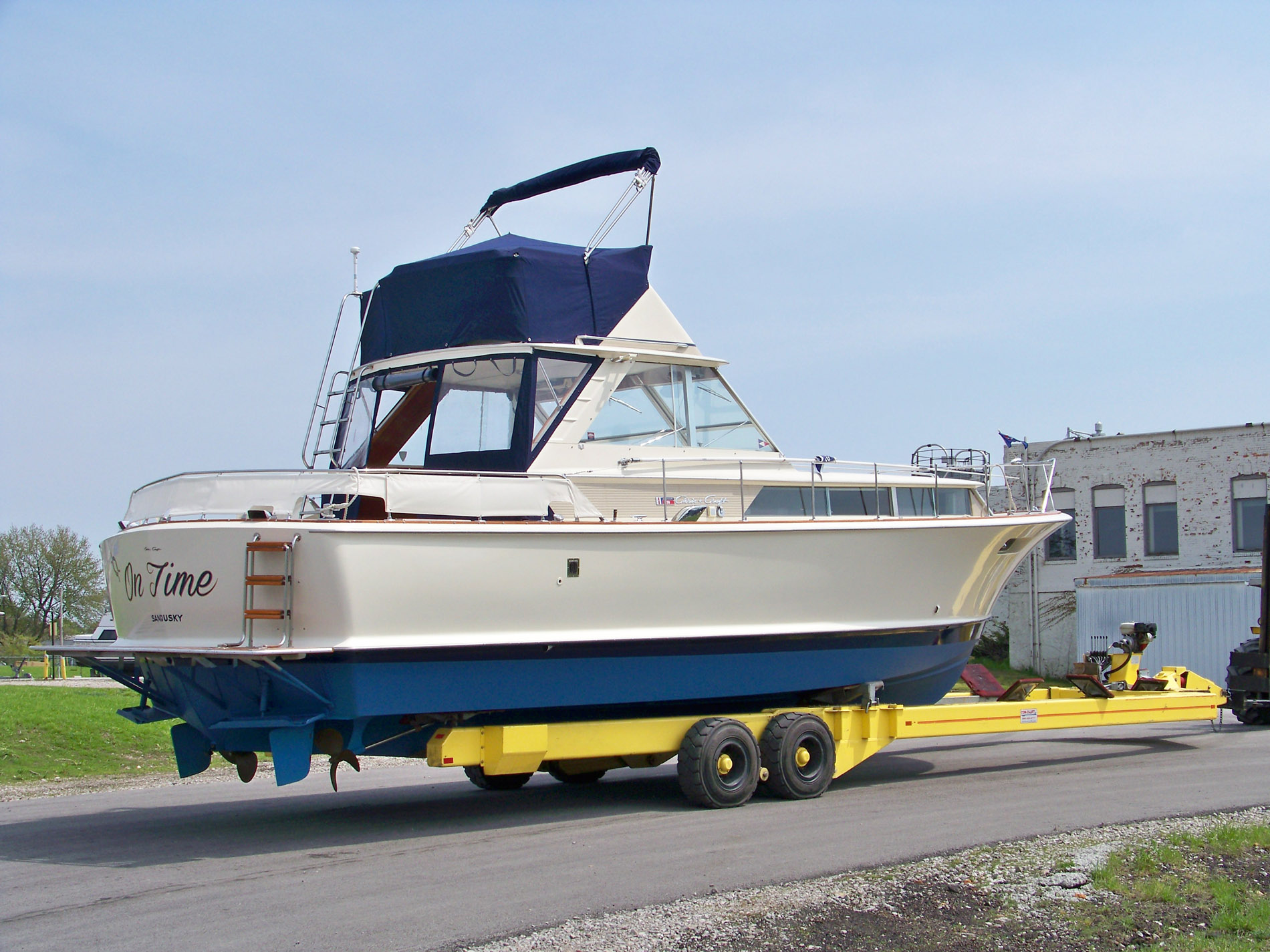 During one interview, about their boat, Bryan said: “As owners of a couple classic wood boats, one thing we thought we were giving up, when we bought the 38Commander, was that WOW factor. Boy were we wrong. This boat and these Commanders, in general, are timeless.  “On Time” gets as much, if not more attention, than our Connie did. Where ever we go, we get comments on the design, and the quality of the restoration of our Commander. 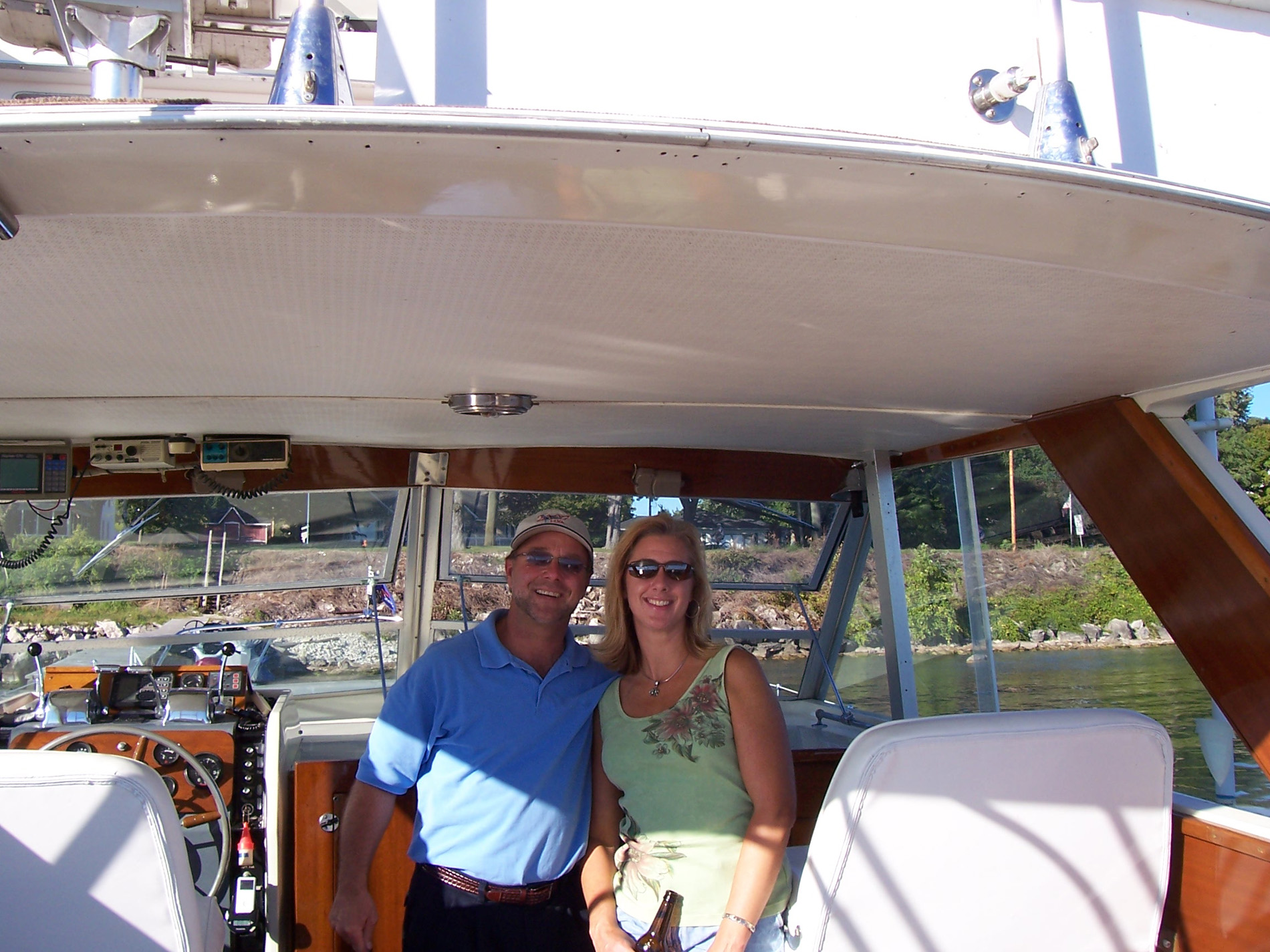 "We are pleased and proud to be selected as the flagship of the Commander Club Rendezvous celebrating the 50th Anni-versary of the Chris-Craft Commander. We certainly plan to be there along with the “On Time” in Huron August 1. Hope to see everyone there.”

Authors note – I certainly look forward to seeing Julie & Bryan at Huron, plus I plan to sneak aboard and see if he’s invented a Commander sized pizza oven.   See you in Huron !