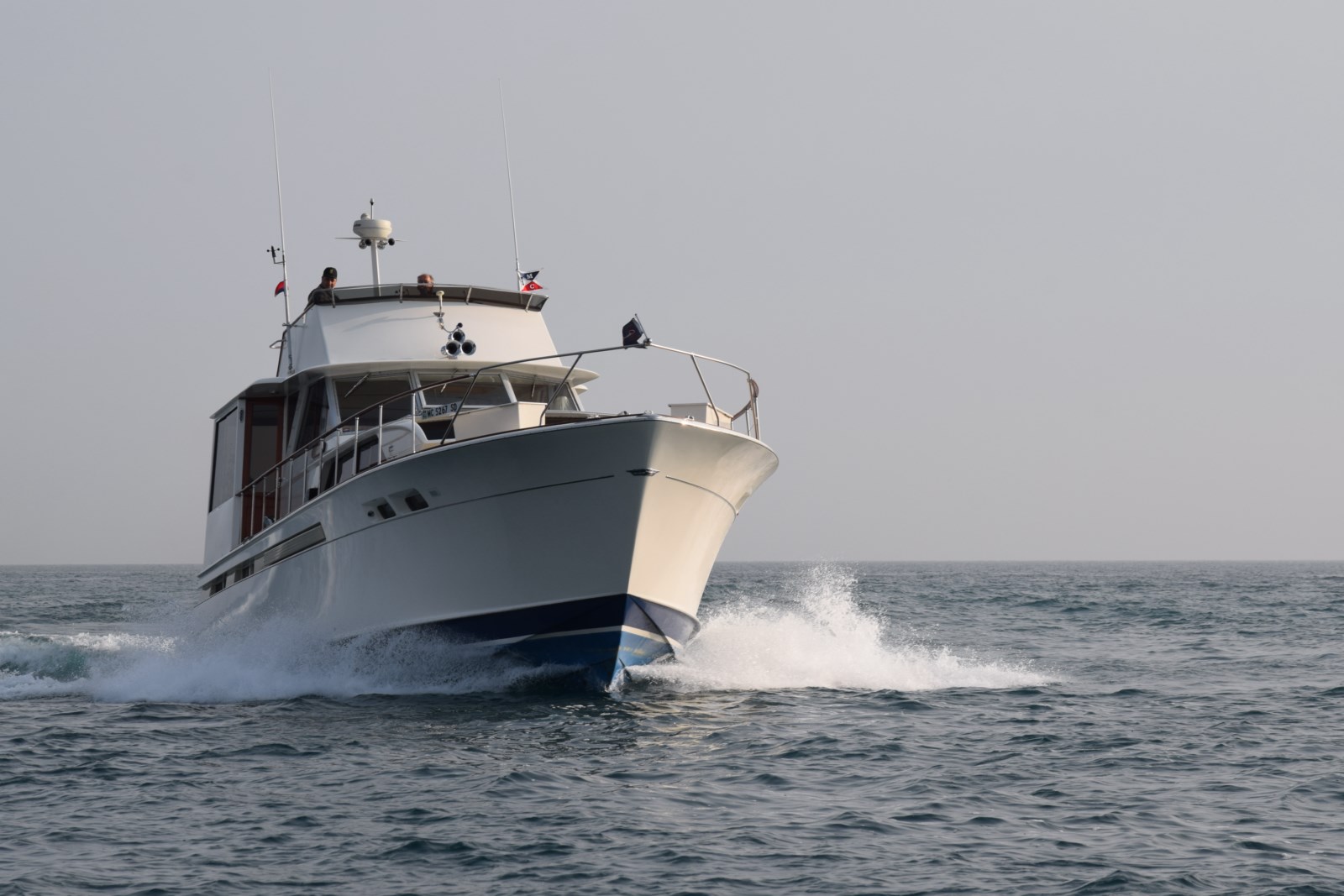 In 1999, when Jim Mathis decided to undertake the custom rebuild of a 47-foot Chris-Craft Commander, he began with a blank slate.
“It was just a bare hull, nothing there but the fiberglass,” he recalled. “There was nothing in it, just a shell – no glass, no hardware, no nothing. Which was nice. There was nothing to take apart.”
As Mathis tells it, taking a classic boat apart is the tedious, time-consuming stage of the rebuild process. Putting it together, by comparison, is a snap.
Working 7 days a week, 6 to 8 hours a day, it took him only a year to transform that bare hull into the luxurious Lena Estelle, a drop-dead gorgeous vessel with a mahogany interior, custom cabinetry, immaculate brightwork, and twin Caterpillar diesel engines. “The work went quick,” he said.
Mathis and his wife, Elaine, live in a home on a canal that feeds into the St. Clair River. They are just minutes from Algonac, the border town where Chris-Craft was born in the 19th century.
Although now retired, Mathis was still working as a model maker for Ford Motor Co. in ’99 when he bought the hull from WC Beardslee Inc., a marina on Harsens Island. A previous owner had stripped the 1967 Commander before abandoning plans to create a custom boat.
Commander hulls were made with fiberglass a 1/2 inch thick, and they are known for being strong, durable, and virtually problem-free. Mathis said he could not pass on the opportunity to work with one.
“Commander hulls are bullet-proof,” he said. “You can’t see anything wrong with them.”
They are surprisingly light, he added, “weighing maybe 3,600 or 3,800 pounds. The idea that they’re heavy is a fallacy.” 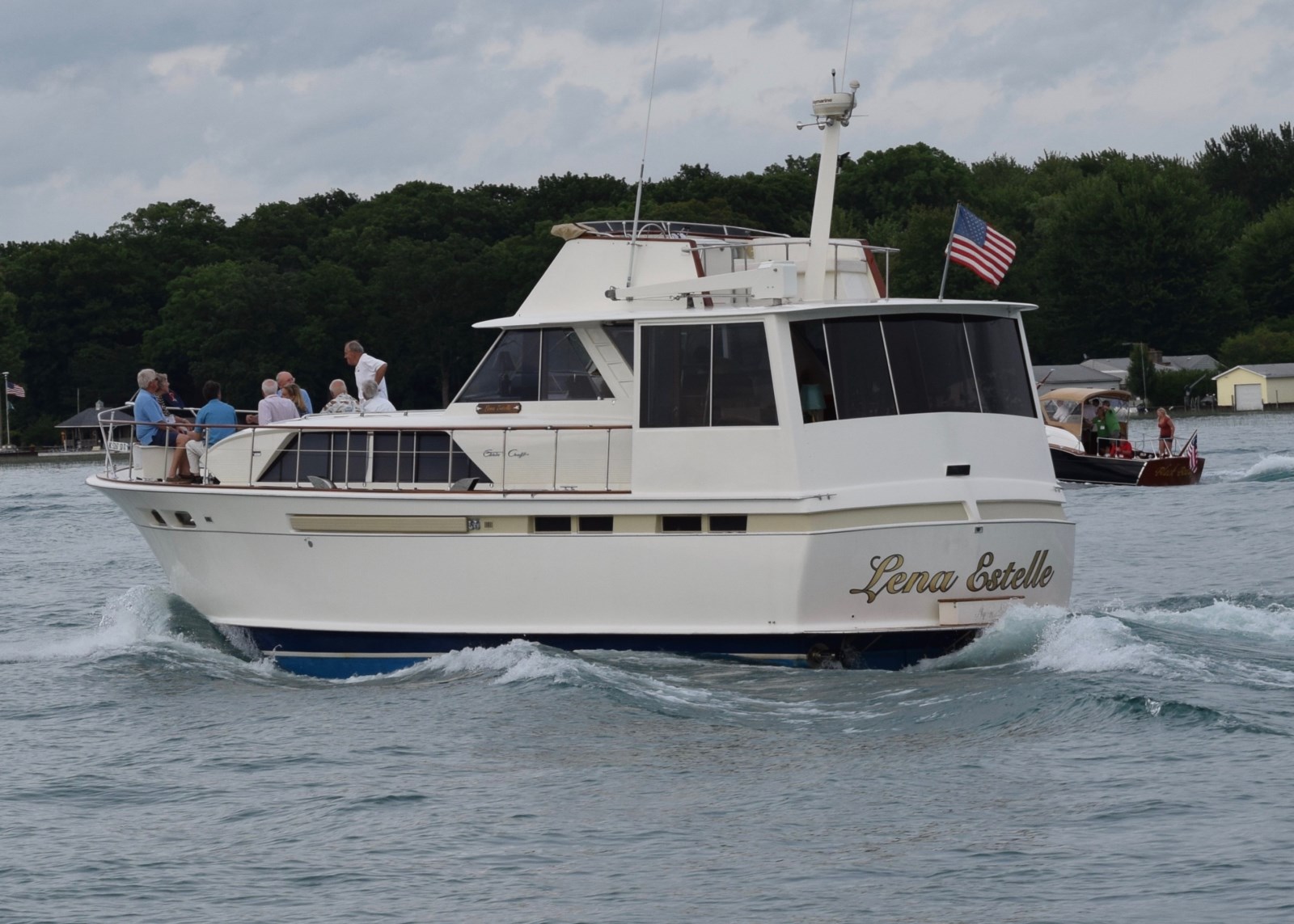 A 17-foot Whaler towed the 47-foot hull from the marina on Harsens Island to his home on the River. He undertook the rebuild there, doing metal fabrication and custom work in his garage workshop.
What he created was a unique, one-of-a-kind vessel, but then Mathis was uniquely qualified to build it.
As a young man, he helped build IndyCars for a race-car shop in the Detroit area. That is where a Ford engineer noticed his mechanical prowess and chose him to work on a very special project.
“I got hired at Ford to help build Ronald Reagan’s presidential limousine,” he recalled. “It looked like a Lincoln Town Car, but it was totally custom. Everything in it was fabricated from scratch. Everything had to be bullet-proof and fail-safe.”
A fortress on wheels, the presidential state car could resist a barrage of gunfire. It could travel up to 30 miles without oil or fluids. Completed in 1989, the limo would be used primarily by President George H.W. Bush.
Mathis stayed with Ford for another 28 years. An ultimate craftsman, he can fabricate just about any part for just about any vehicle or vessel.
“Whether it’s a Ford or a Chris-Craft, you gotta make it,” he said simply.
His talents are treasured in the community of antique and classic boating. He often gets commissions from fellow boaters to fabricate unusual or hard-to-find parts.
Mathis also is keen on logistics. He paid special attention to doing things in the proper order during the building of the Lena Estelle, which blends the first names of his mother and mother-in-law.
For instance, he remembers Elaine asking why he began hauling furniture into the cabin when the boat looked only half-finished.
“Once the top goes on,” he told his wife, “you’re not getting a full-sized refrigerator or a leather couch in there.”
He built a form for the hard top, which is 15 feet wide, and had it molded at a shop in Sterling Heights, Michigan. When it came time to install it, he recalled, “Six or eight people walked it out there.”
His search for engines led him to Maryland, where he spotted a pair of Caterpillar 3116 diesels for sale for an appealing price. “I rented a truck, went down there, and picked them up,” he said.
“It runs pretty close to 20 knots,” he said. “The diesels only have something like 600 hours on them – 600 hours in nearly 20 years isn’t much.”
Chris-Craft produced just 253 Commanders during a decade of production, from 1966 to 1976. They were floating vacation homes, large enough for a family to escape in comfort.
“For a vessel of its size, this model offers an unprecedented amount of luxury, comfort, and interior spaciousness,” a Chris-Craft advertisement crowed in 1967. “Beam is an extraordinary 15 feet, which helps account for the roominess.” 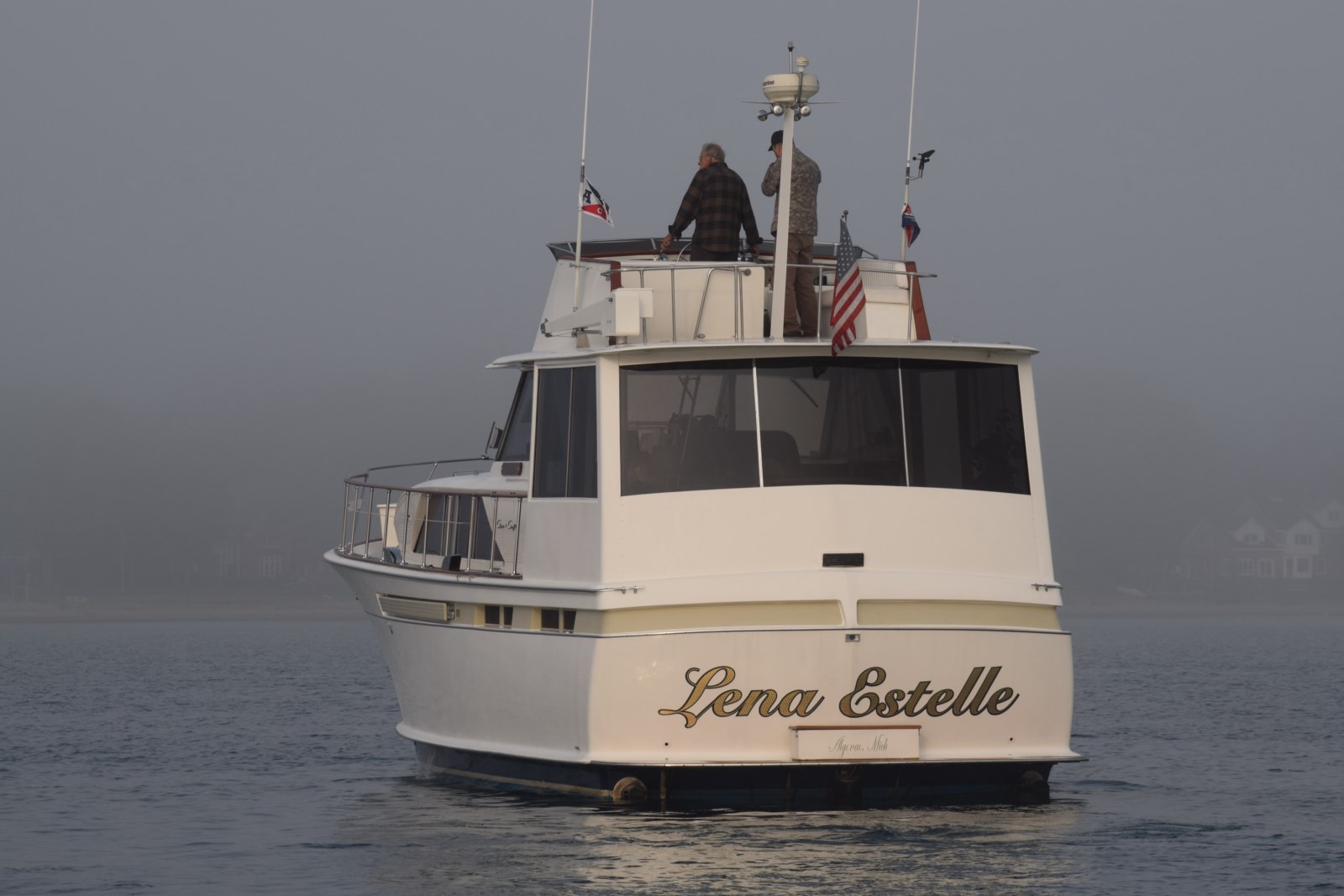 Mathis cherishes much of the original Commander design – the wide, safe walkways, the roominess, the comfort. Still, he did not attempt to replicate the original design in every detail.
Instead, he built the boat he wanted, an award winning Commander.
Its interior walls are covered in ribbon-grain mahogany, while the bridge is largely aluminum, including its structural supports. Every pane of glass is safety glass.
In the gallery, there’s a marble counter, a microwave, a three-burner Princess cooktop with an oven, and that full-sized Avanti refrigerator.
The boat comfortably sleeps as many as 10 people, including an aft cabin with a Queen berth, a forward cabin with twin berths, and a side cabin with over-under twin berths.
The original Commander came with a 32-volt electric system powered by a dozen batteries weighing roughly 1,800 pounds total. Mathis went in a more modern direction, installing a 12-volt system powered by a Northern Lights marine generator.
The 40-foot exhaust system is all stainless steel and turbo-charged, which knocks the sound down. Even the fuel tanks are custom.
“I designed them so they’d go through the door,” Mathis said with a grin.

Jim is a long-time member of the Michigan chapter of the Antique and Classic Boat Society. He and Elaine rarely miss a boat show in the region stretching from Toledo on western Lake Erie to Port Sanilac on southern Lake Huron.  They are sure to be on hand in mid-September 2018 when the ACBS International Show brings a flotilla of North America’s finest boats to Port Huron, MI.

Editor’s Note: Jim and Elaine are long time members of the Chris Craft Commander Club and have attended many events. Lena Estelle was featured in Motorboat Magazine. Jim remanufactures some parts for our Commanders., Call him to see what he has.
Hardware - stainless steel, custom made vents and other parts
Jim Mathis Marine Reproductions, Algonac MI, 810-794-7231, 810-794-4318