Boating has been in Lee Dahlen’s blood since he was born.  His parents put his playpen on the aft deck of their boat, when Lee was a baby (Lee did this with his kids, as well).   When Lee was 5 years old, he had an amazing experience.  His parents were part of the Power Squadron and each year they took a cruise, stopping at several ports of call along the way.  In 1971, the cruise was to take place on the Chesapeake Bay.  Hurricane Agnes was growing and on the move and the Power Squadron cruisers were tracking the hurricane very closely.  It was determined that Agnes would miss Oxford, Maryland, so the cruise headed to Oxford.  Agnes and Mother Nature had other plans and Oxford ended up taking a direct hit from the hurricane.  While many of the cruisers were tied up the shore, Lee’s parents and another family anchored out and rafted their wood plank boats together. The two families traveled together often and typically the adults would sleep on Lee’s parents boat (the larger boat) and the kids would sleep on the smaller boat. This night was no different with Lee’s mom was staying on the kids boat, as well.  During the night, the hurricane hit.  Keep in mind that there was no GPS, no Cell phones, and even radios were not good, so there was essentially no warning.  The boats began crashing together, crushing them as they were built of wood.  They struggled to cut the lines, tying the boats together, as they were unbelievably tight from the stress of the wind.  The 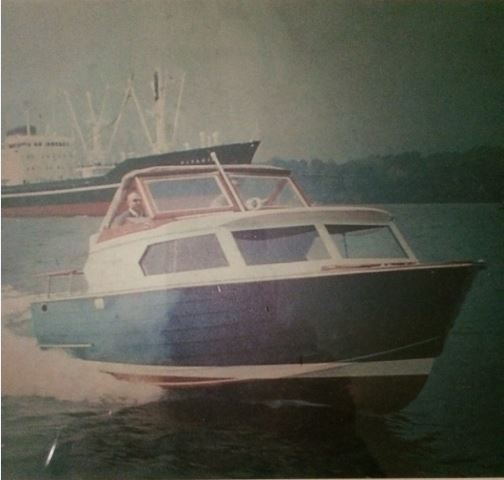 anchors started dragging.  The lines were finally cut and the boats separated in the darkness.  It was terrifying. Lee’s mom kept the kids calm by singing the theme from Gilligan’s Island.  The plan was to keep the boat into the wind to try to keep from blowing ashore.  It worked!!  They were finally able to drop anchor once things calmed down and were able to get a couple hours of sleep.  But where was the other boat?? Were they safe?  As the sun rose, they could see that all the other Power Squadron boats littering the shoreline.  At first, there was no sign of Lee’s parents boat, then suddenly off in a distance, there they were!!  They were safe!!!

At ten years of age, Lee and his family moved aboard a 43’ houseboat, named Norah’s Ark,  in Maryland.  They had been on the boat for about two months, when Lee’s dad was  informed he was being relocated and it would require a transfer  to North Carolina. (This sticks in Lee’s mind as the news about the relocation occurred on the same day that Elvis died. ) Lee’s dad agreed to the relocation with the condition that his company must move their boat.  The company agreed.

Around this time, Lee got his first boat which was an 8ft Sportyack dingy.  After a couple years, an outboard motor was added to the Sportyak.  Lee’s next boat was a 12ft Gamefisher  aluminum boat with outboard (Lee’s mom ordered this boat out of the Sears catalog!).  Right about this time, the family sold the houseboat and moved ashore. Even though they no longer owned a boat, the fever did not go away.  Several years later, Lee passed a boat that had been “swallowed” by a garage due to Hurricane Hugo. Every day, he passed this boat and his interest grew. One day, Lee could not take it anymore and stopped to ask if the boat was for sale.  This was a 1966 27’ Express Commander.  The owner decided to sell the boat to Lee, with the condition that Lee had to remove the garage from around the boat.  Lee and his dad 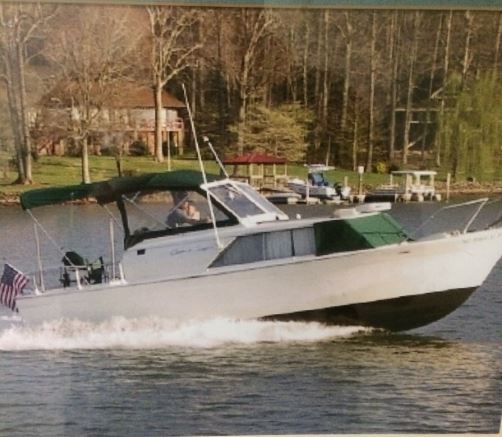 became partners in the boat, Lee’s dad putting up the purchase funds and Lee providing the labor.  As you can imagine, this poor boat had suffered from years of neglect. Lee still owns this boat today and she is all original except for the engine.  From the factory, This boat had a Chrysler engine, of which Lee was not a fan.  He replaced that engine with a 350 Chevrolet that he built from the ground up.  Since then, Lee has found that this boat was rare, because of the Chrysler engine.  During the time his boat was being manufactured, Chris-Craft had a fire in the plant that built their engines.  While that plant was out of commission, Chris-Craft  purchased a bunch of Chrysler engines so that they could keep the manufacturing lines moving.  Lee still owns this boat to this day.

Lee’s next commander purchase was a 1970 31 sport fish, another rare boat, as it did not have a fly bridge.  This was another boat in serious disrepair.  Lee refurbished this boat, too, but has since sold it. 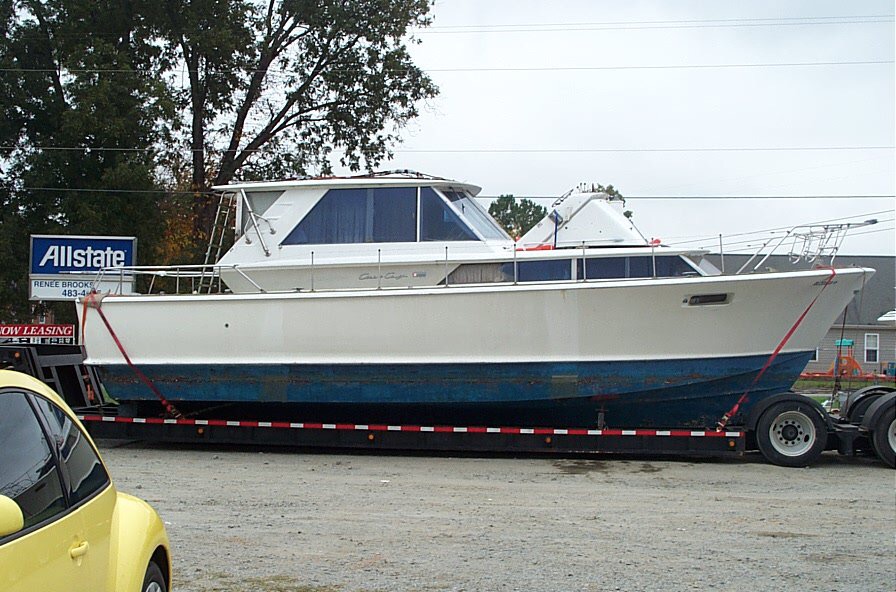 Lee’s third Commander is a 1967 38’ Sedan FB.  This boat had been abandoned and he was able to buy it for the outstanding yard fees.  It is currently gutted and, as time allows, Lee works on the boat and believes this will be the Commander he ends up with.

Lee has always been mechanically inclined.  He pursued and attained a degree from the Nashville Auto Diesel College, Gas and Diesel Technology (including computer systems).  Lee went to work in a garage, fixing cars, and hated it!  Sharing the building with the garage was a boat dealership.  Lee was able to work his way over to the dealership and started working on boats at the dealership,  Lakeside Marine. Lee worked at the Lakeside from 1987 – 1990 when the dealership went out of business.  Lee decided to start his own business and named it Shoreline Mobile Marine.   Since Lakeside was going out of business, he was able to take all of his existing customers with him, to his new business.  The endeavor failed after a year as it was underfunded and Lee simply knew nothing about running a business.  Lee then went to work for a sailboat dealership that transitioned from a dealership to a transporter.  This is where Lee learned to drive a tractor trailer. In 1993, Lee received his Commercial Driver’s License and began hauling sailboats all over the country.  Out of the blue, Lee then received a call from a steel company saying that he had been recommended as a truck driver.  The steel company offered him a job and taking this job meant he would stay closer to home so he took it.  He’s worked there from 1995 to current. He now had a job that would allow him to dabble in the boat repair business on weekends.  This “dabbling” turned into Glassic Boatworks. Lee was planning to  become a full-time boat technician and even made the announcement of the transition.  This announcement was in conjunction with the ending of a major contract, the steel company had with a very large company. Well, the company decided to sign another contract and specifically asked for Lee to be their driver.  Well, the steel company made Lee an offer he could not refuse so he continues to drive for the steel company a few days a week.

Meanwhile, Glassic Boatworks has continued to grow and the business takes Lee all over.  He is willing to travel anywhere in the country to preform boat related tasks.  While Chris-Craft Commanders are Lee’s niche, he works on any boat, Power or Sail, Gas or Diesel. He attributes the success of this business venture, over his last attempt, to developing a flat rate pricing structure.  When you hire Lee for a weekend, you pay one flat rate, and you get many, many dedicated hours.

Lee has 2 children Patrick (24) and Kelsea (22) and resides in Charlotte, NC. Lee is a frequent contributor on the Commander Club forum and you can contact him at glassicboats@gmail.com or you can visit his site at glassicboatworks.com

More Information on the 27 Express Commander