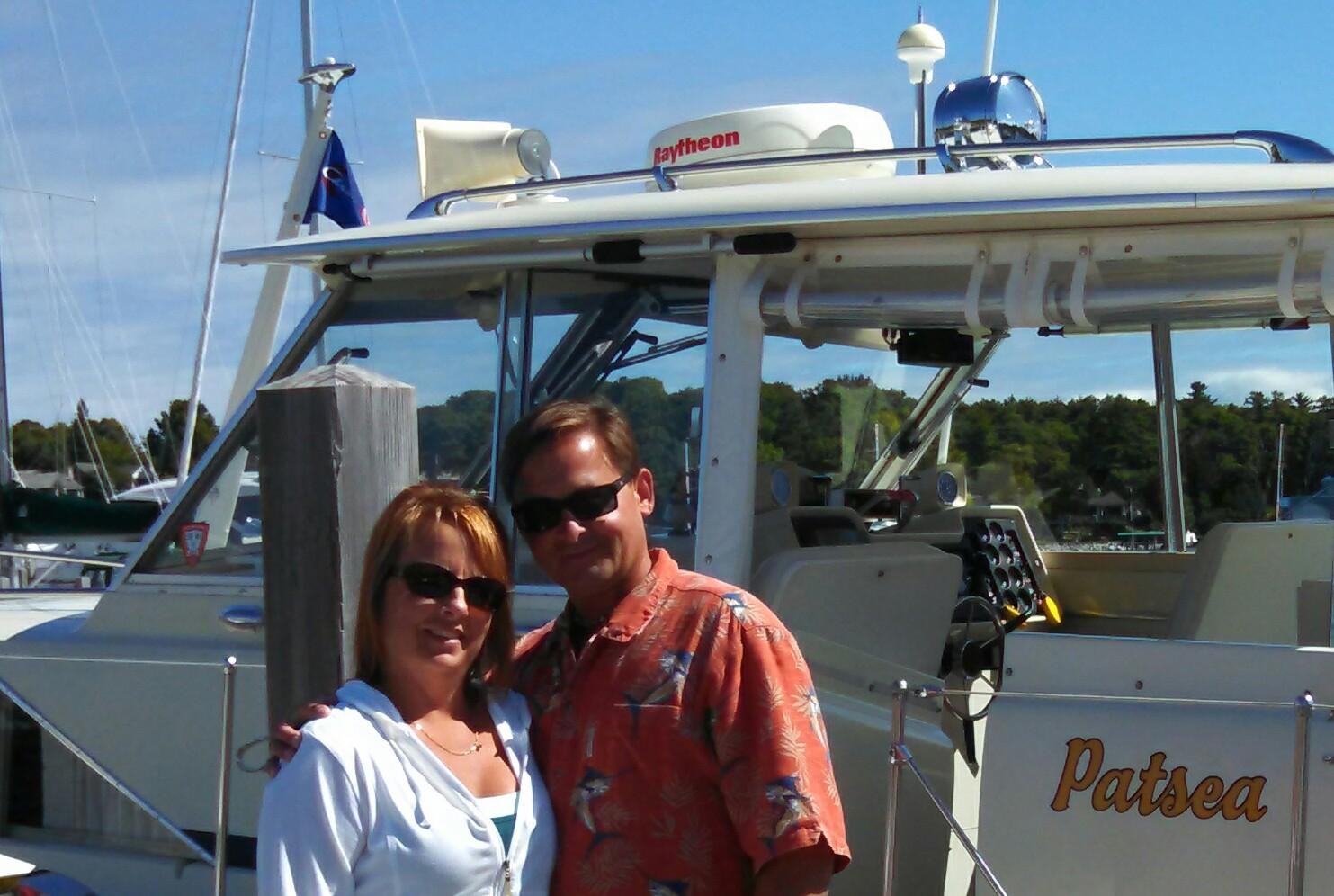 Marc and Ann Boudreau are the proud caretakers of PATSEA, a very rare 35 Commander Salon.  Only 25 were built.

PATSEA plies the beautiful waters of Grand Traverse Bay most every weekend in summer.   Since her July 1972 delivery at Bay Haven Marina in Holland, she has spent her entire well cared for life based in the waters of Northwest Lower Michigan.  Her hull number is FBA-35-0009H.  She's in excellent original condition with some updating to mechanicals, electronics, and cabin appointments.  She has been repowered with Crusader 454 MPI engines. 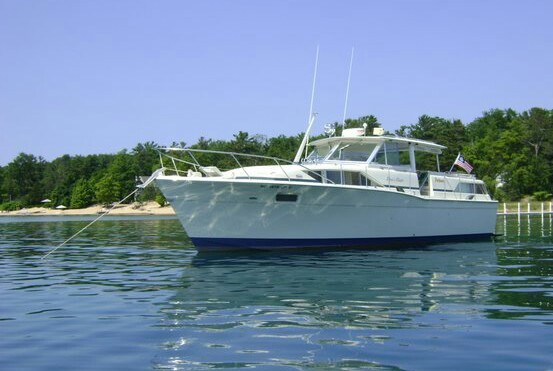 Marc and Ann are the fourth owners of PATSEA.  She was delivered via the CC launch facility in Holland to nearby Bay Haven Marina on 7/8/1972 and so is titled as a 1972, although Marc is convinced she came off the line much earlier to be sold as a 1971 (early hull number, copper bottom paint, and electric panel dated March, 1971.)  She was cruised up to tiny Round Lake at Charlevoix, MI and resided there through three owners for the next 39 years (always on the North shore of Round Lake).  The Boudreau’s purchased her through a local broker in the spring of 2011.  According to Mark “PATSEA is derived from the previous owner's wife's name, and we liked it, thought it fitting, and kept it.  She was formerly called WINDY and NANCY’S NAVY.”

Marc shared a recent event.  “Interestingly, we just met the previous owners, Dick and Pat, a few weeks ago.  They were back in Charlevoix on vacation and came looking for PATSEA down in Traverse City.  After cruising the areas marinas, they found her and left their card.  We happened to be cruising up to Charlevoix a few days later and looked them up.  Having previously relocated to Arizona, they hadn't seen their old boat in several years by this time, and so were ecstatic to see her again.  We went for a ride on Lake Charlevoix and Dick took the helm. The smile on his face was absolutely priceless!  Ann and I were so glad he got to drive his old boat again.” 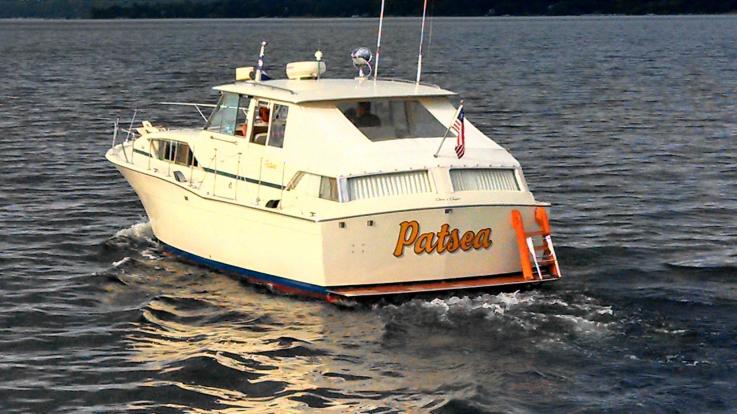 How did Marc and Ann become Commander owners?

I've been smitten with boating since 1977 when my parents bought a small cruiser for the family.  I had my own boat, a 1939 17' CC Deluxe Utility, by the time I was eighteen.  Then in 1981, while attending college, my buddy got me a job as a finisher at Grand Craft, in Holland, MI, a maker of wooden CC replicas.  Met Chris Smith a few times while working there.  Later, I worked part-time at Bay Haven Marina in Holland where, in 1972, my 35' Salon PATSEA was originally delivered!  How's that for irony?!  I literally drove by the Holland plant on Ottawa Beach Road every day on my way to work.  And each time I would check out the cruisers parked outside, waiting for delivery.  Never imagined that one day I would own a boat actually made there!  Luckily, I met my wife Ann in 1991, who was raised on her parent's lake side resort near Traverse City where she grew to also enjoy boats and boating.  We were married in 1992 and we restored our 1959 18' Cruiser's Inc together in 1993.  We then graduated to cruiser types the very next year.  Ann found PATSEA on Yachtworld after we sold our previous Trojan cruiser.  We drove up on a rainy Saturday in the Spring of 2011 to see her, and I knew she was mine the minute that garage door rolled up to reveal her!  I literally heard angels singing!  Ok, well maybe just figuratively...

We're on the boat virtually every weekend throughout the season, rain or shine, but of course shine is better!  We've met many great friends while boating, and look forward to one day retiring on a boat!

We have one other CC, a 1962 18' Cavalier Sports Utility that needs some more love before she goes back into the water.  It was made at Cadillac, just 50 miles from where we currently live near Traverse City. 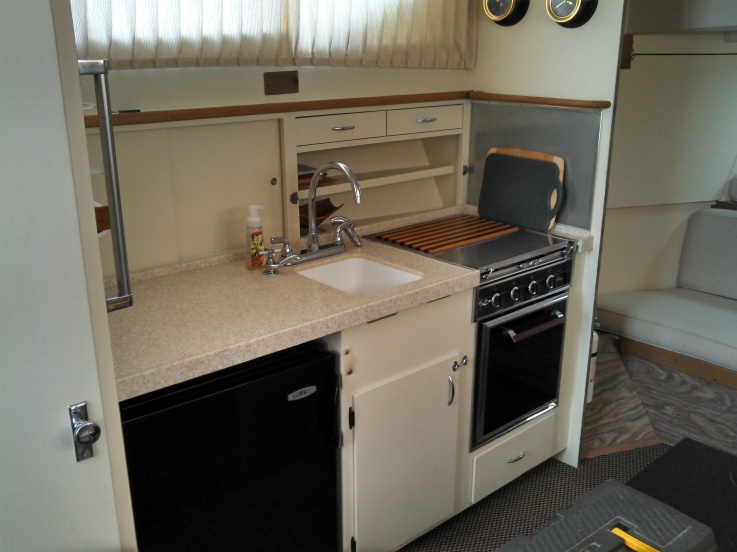 Marc and Ann pass the winter months by downhill skiing (when they’re not shoveling snow!).  They met 23 years ago working for an airline, and so have traveled extensively since those days. They still do travel just not as often as they’d like!  Marc also enjoys cars and has owned a '64 Corvair Spyder since 2001. 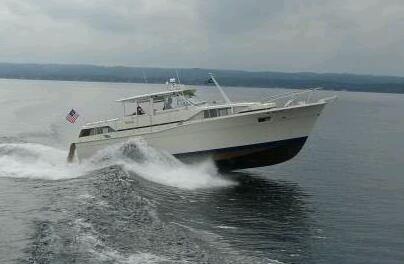 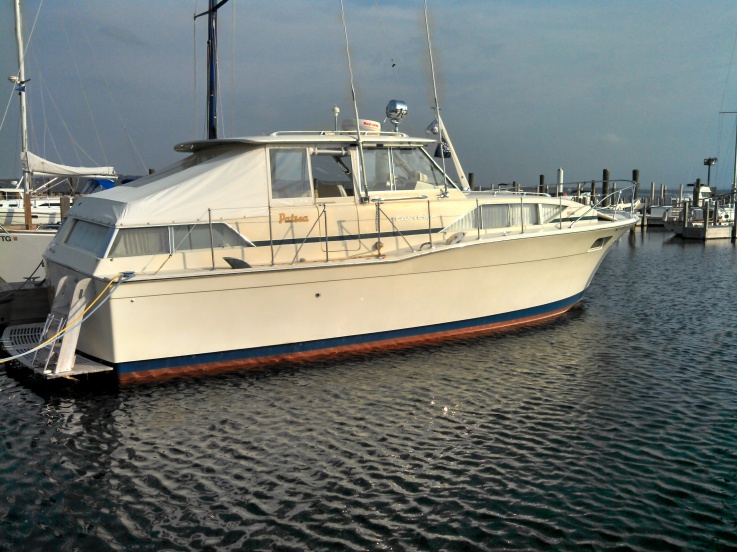 The Chris Craft Commander Club thanks Marc and Ann for sharing their story and being caretakers of this very rare boat.