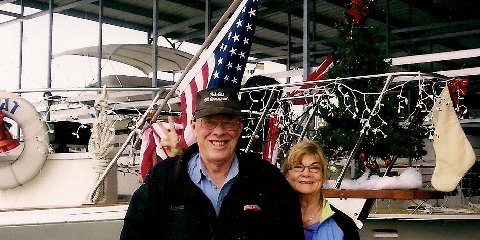 When I contracted Margaret about doing the member spotlight on her and Ron, I already knew that they had lived aboard for a while.  When I sent Margaret a list of questions to get me started, I was AMAZED by their life aboard Bob Cat, their 1966 47’ Commander.

Ron and Margaret met in New Orleans and married there in 1976.  They lived there 15 years and Ron was a Construction Superintendent and Margaret worked as a chemist for a pharmaceutical company.  Between them they have 6 kids, 10 grandchildren and 3 great grandsons.  They are scattered from New Orleans to New Hampshire.

When the company that Ron worked for went bankrupt in New Orleans they moved to Virginia.  They thought, at the time, it would be a fairly long term assignment but as the sayiing goes “life happens” and they found themselves in Washington, D.C.  They were staying at a hotel at Herrington  Marina and Ron told Margaret that he had always dreamed of living on a boat.  She turned to him and said “I’ve known you this long and I’m just finding out about this dream?”  Ron would later find out that Margaret had an interesting “secret” as well. 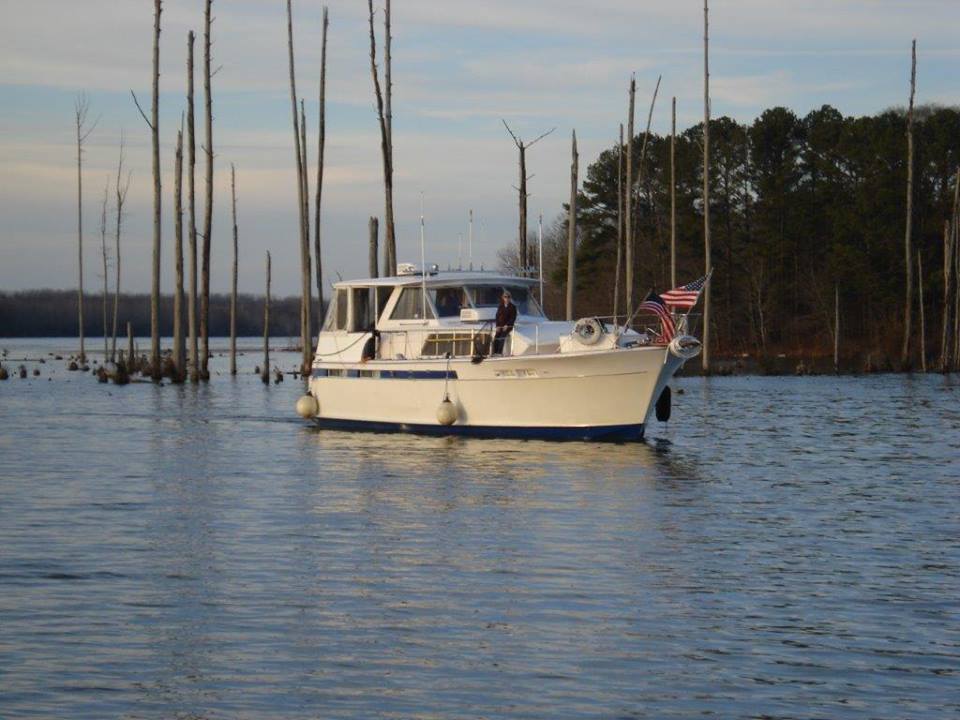 Yes, 1993.  So, except for a few assignments in land locked areas, they have lived aboard twenty one years!  Margaret admitted the hardest part was getting rid of their stuff.  They bought their boat at Joy’s Marina in Hampton Road, VA and moved it to Herrington Harbor South which was a beautiful showy resort.  This would be their first of many trips on a big boat in big water.  They soon moved to Herrington North Marina which allowed boat owners to work on their own boats.

Ron’s job kept him on the east coast for quite a while and it worked out so that Margaret was his Office Manager.  The Bob Cat was their home in Maryland, Virginia, several years in New York City, Massachusetts, Rhode Island and then south to Marathon, Florida.   Ron and Margaret really enjoyed their time in New York where they were at the Royal Marina on City Island (which is no longer there).  In the summer, they would anchor off the west side of Long Island and watch the “fancy people” in their mansions.  It was a great time and one of the reasons Margaret loves the boat so much.

From Marathon, FL they moved to Mobile, AL.  The hospital they were working on lost its funding so they left the boat in Mobile and worked on several “land” jobs.  One of those jobs was in Tullahoma, TN where Bob the Cat found Ron in the back alley behind a marvelous Pizza Restaurant called Fast Jack in 2002 (which is still there).  He has accompanied them from Tennessee to Texas, to West Virginia and back down to Alabama.  Bob’s name was extended due to a son-in-law named Bob, Uncle named Bob, good friends named Bob and a slip neighbor named Bob.  So how did Bob Cat (the boat) get its name?  That is what the boat was named when they bought it and the family could never agree on another name.  And all this time I thought Bob Cat was named for the cat!

Ron and Margaret were working in Texas the summer of 2004.  Reports of Hurricane Ivan aiming for Mobile, AL and growing in intensity were on TV for days.  They put Bob the Cat in a boarding kennel and took off for the Bob Cat.  It took 17 hours to get to their marina on the Dog River.  Working with several other boats, they “spidered” their boats in the middle of the channel tying to the very large pilings on the dock. According to Margaret, “The storm hit.  Transmission towers exploded.  We sat on the couch on the entertainment deck by the wheel and I had a glass of wine.  Storm was to hit Mobile around 1am.  Our son-in-law Bob called asking to speak with Ron.  He used very rude language telling Ron that sitting on a boat in a category 3 storm was “stupid”.  That Ron was trying to kill his mother-in-law.  Ron was not able to calm him and we didn't get to speak with our daughter.”

“Ron asked if I was ok with staying aboard.  Sure, I said, and had a glass of wine.  Around 11pm the storm was creating 3 ft. waves in the marina.  Ron decides we will go ashore and sit in the car.  We are over 30 feet from the dock on both sides.  Get ready, he shouts above the noise.  At this point I have our important papers and my purse in a plastic bag and it is tied to me.”  “OK”, I said, “but Ron, I can't swim.”  This was Margaret’s “secret”.

“Ron got this amazing look on his management-in-action face.  I had a glass of wine.  After a moment to adjust, he put two life jackets on me and tied a half inch line to the jackets.  He swam, holding the line secured to the boat and the faraway dock.  Pulling me along we made it to shore.”  While Pensacola took the brunt of the storm, Ivan was powerful enough to push their car sideways against the hill.

Margaret had just been to the boat and was back in 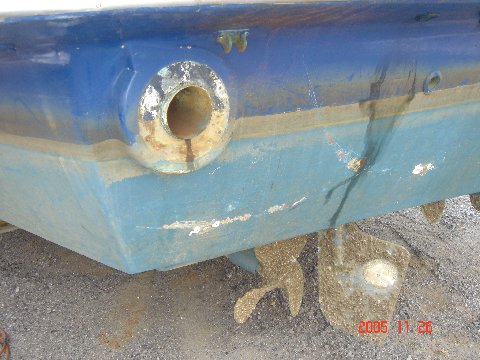 Logan, West Virginia when Katrina hit Mobile in August of 2005.  Bob Cat sank when the storm surge ripped the swim platform off and water leaked in the attachment holes.  Boat U.S. towed the boat to Dog River Marina in Mobile.  The marina owner had moved his travel lift to the Dauphin Island Bridge, thus saving the travel lift from the storm (smart man!).   After the insurance check arrived, Ron gave Margaret a week to decide whether or not to fix up Bob Cat or cut and run.  Of course, you know the answer to this question; they decided to fix it back up.

Ron and Margaret spent about two years at Dog River Marina fixing up their boat.  They totally stripped the interior since water soaked everything.  Along the way they also installed new engines, stainless steel fuel tanks, a generator, shafts, cutlass bearings and hydraulic steering.  Ron could add more items of course, these are just the highlights.

I asked Margaret what was the scariest project they did on the boat.  She replied “The most beautiful and fun project, but scary, was the bow pulpit.  The Bob Cat did not have one, only a Sampson post.  Ron's expertise in building created a great new bow pulpit with new winch.  Works like a dream.  The scary part was cutting the front off the boat to install all the necessary supports, teak, rails and winch.” 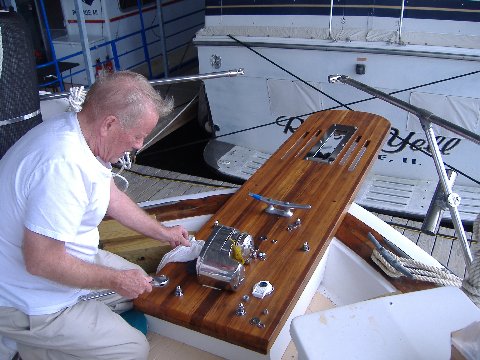 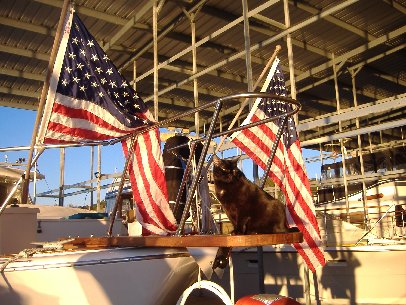 While at the Dog River Marina another storm comes and their dock comes loose and floats away with boats attached.  Ron and two others in 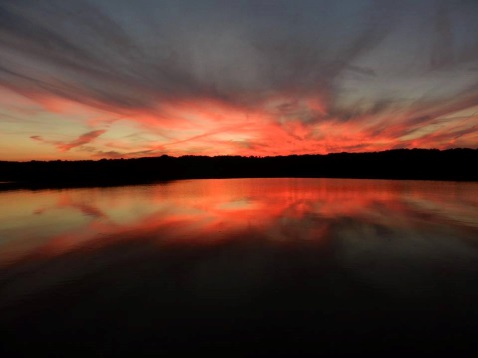 dinghies drag the dock back and Ron, being in construction after all, has all the tools and puts the docks back together.  All was good until it happened a few more times.  (Really?!  A few more times??)  Margaret said “Retirement closed in and we looked for a place where we didn’t have to rebuild or catch the docks as they blew away!”  Their home for the last five years has been at Midway Marina on the Tenn-Tom, in Fulton, Mississippi.  Margaret spends her evenings photographing the beautiful sunsets and the parade of boats that travel the Tenn-Tom while doing the loop.