Ron and Pat Smoker of Austinburg, Ohio have been Commander Club members virtually from the very beginning of the club in 1999.  First, a little history ----

After graduating high school, Ron was attending a local community college full time, while also driving a logging truck for his father's logging business, plus dabbling in his own side business of firewood! Next came Uncle Sam --- Ron was drafted for two years which he spent driving a gasoline truck in the DMZ of Korea. Shortly after returning stateside, Ron & Pat were married in 1969. They ultimately had one son, Matthew. At this point, Ron was working for his father in the logging business. His father was a boat guy, having purchased a 25' Chris Craft in 1954, and then trading for a 40' Chris Craft Express Cruiser in 1957, which became the family boat. Essentially Ron grew up around Chris Crafts. Ron's father was seriously injured and somewhat disabled in a hunting accident. At this point Ron bought into the company, becoming a partner, and the business became 'Smoker & Son'. Even though he was a working partner, every spring he took time off from the logging business to prepare the family 40' woodie for another season. This occasionally entailed a keel to topsides total refinish, which ultimately prepared Ron for later appreciation of fiberglass large boats :-) This family Chris lasted till 1983 when it was traded in for a Marine Trader trawler. Ron & Pat did extensive cruising on this boat until Ron sold it in 1994.

Ron now began looking for a nice 38 Commander as their next boat. Ultimately he found a 1967 Sedan located in White Lake, Michigan. After a bit of dickering he bought the boat from a broker who had sold this boat twice already.

It had a fresh Awlgrip p 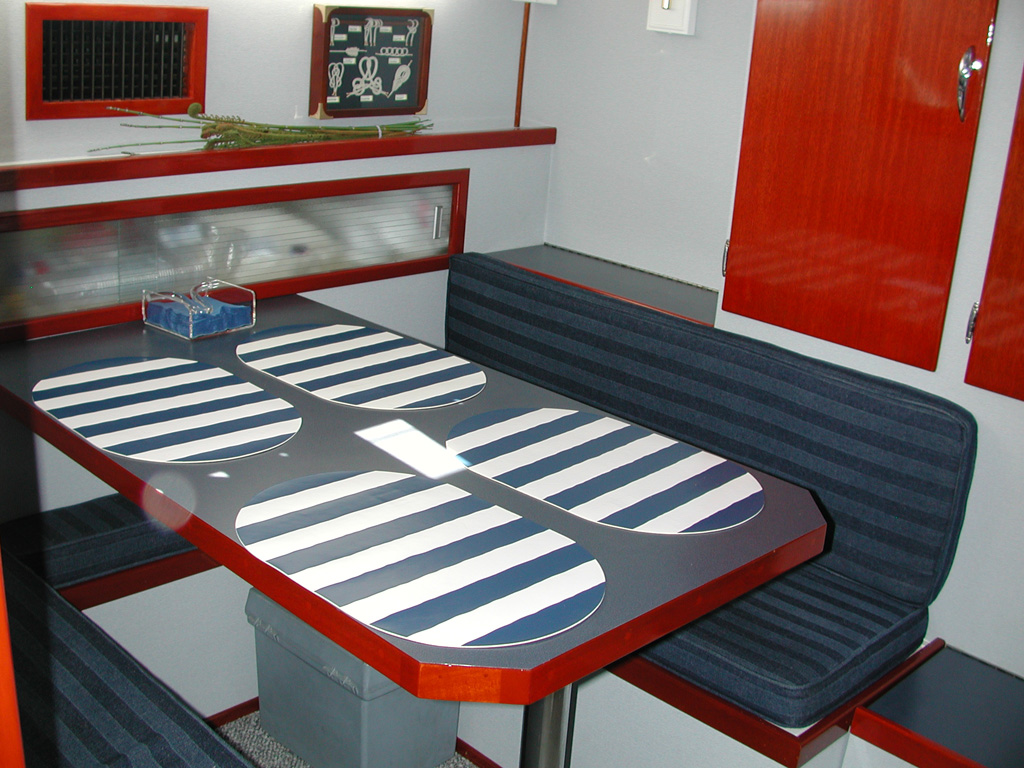 aint job on the hull, but the interior was a bit dated & shabby.  A pair of 427's of unknown reliability were in the engine room. Not willing to risk a really, really long trip by water with an unknown entity he decided to have it trailered home. This always requires removing the fly bridge. Knowing he would be the one to reinstall it at home, Ron traveled to White Lake, and over a 4 day thrash removed and secured the bridge, and prepared the boat for road travel. Once home and with the bridge reinstalled, job #2 quickly became obvious --- removal of a leaking waste system bladder that had not even been properly pumped the previous fall. That summer doing limited boating with their new acquisition, Ron became quite adept at one engine docking ! As mentioned before, Ron was a partner in the logging business, which had by now morphed into a sawmill. The business already had a semi tractor, so Ron acquired a trailer for the 38 so they could winter store (and work on) the boat inside at the sawmill. Off comes the bridge again, much faster this time, and the boat goes inside for an interior remodeling. Ron sketched up their ideas which included a major re-do of the head, incorporating an enclosed shower, and some major updates 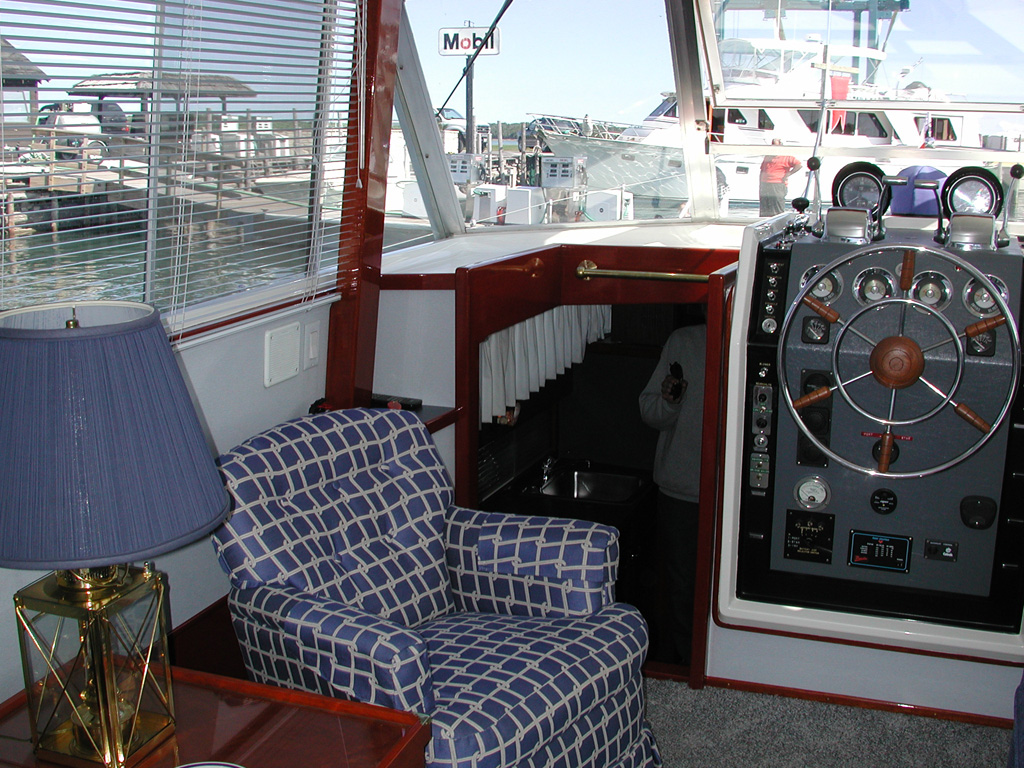 in the galley area which included an apartment sized refrigerator. The entire interior, salon and lower, were redone during this winter. At one point they had a finish carpenter working full time in the boat for six weeks. In the spring, they were $19,000 poorer, but with a dyno-mite interior! They did quite a bit of cruising in the summer of 96. Ron now had the 427 gas motors fairly reliable, but he still wasn't happy. He had always wanted a diesel powered cruiser, and by now, Summer Song lacked only the diesels.

Great Lakes Power, a local Twin Disc transmission dealer located a pair of 200 hour 3116 Caterpillar marine takeouts for sale out East. They came and measured Summer Song's engine compartment, then did an engineering Auto Cad layout to see if the Cats would fit. They did, barely! Great Lakes then acquired the engines, fitted them with down angle Twin Disc transmissions, and sold Ron the package. They also gave Ron drawings of the required stringer and other modifications, informing him the existing 1 3/8" shaft 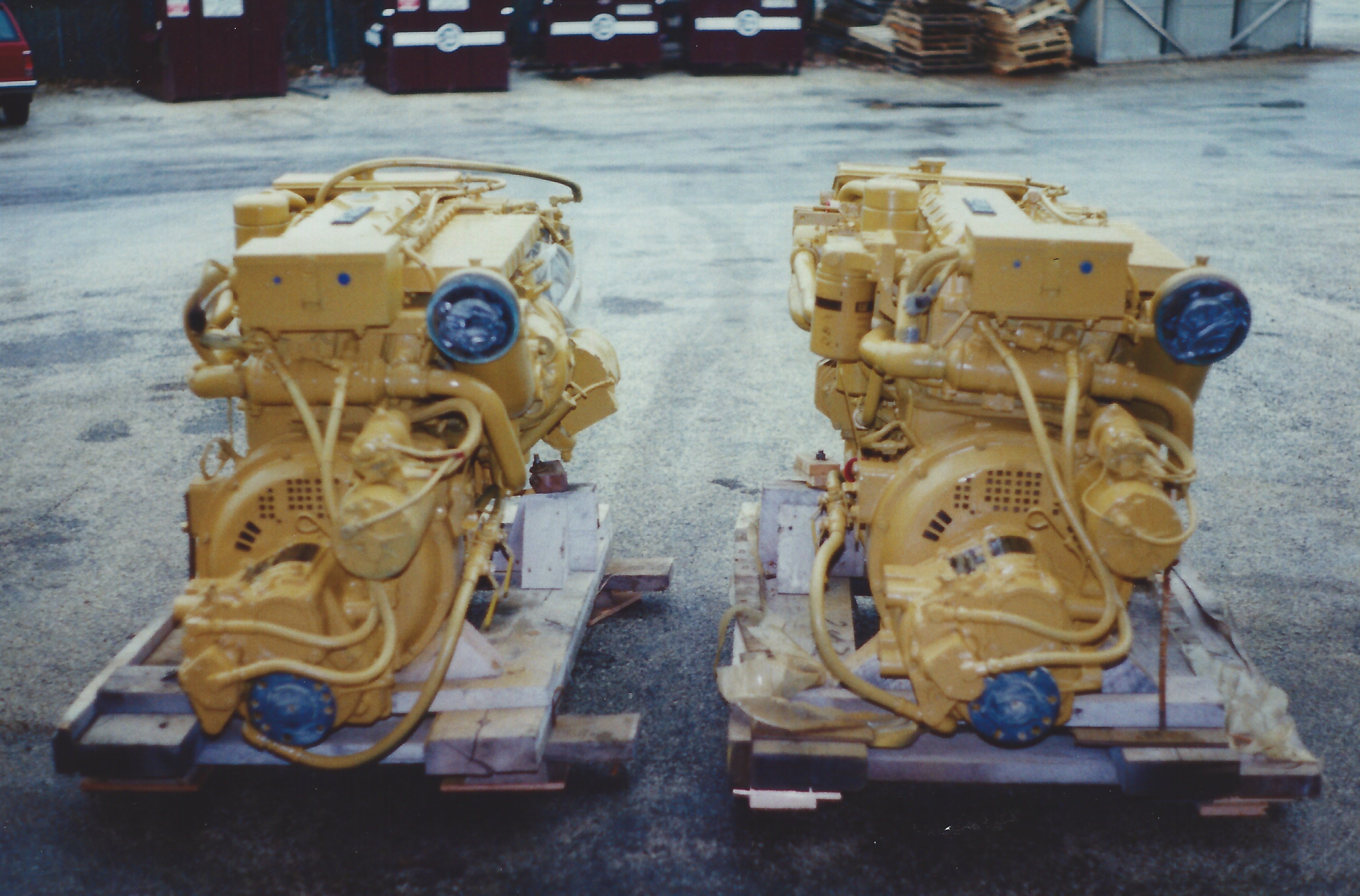 s would be OK.  (Author note --- I damn near choked on my Martini when Ron told me of this comment!)  So, off with the bridge, by now a 2 hour operation due to a lot of quick disconnect stuff, and back into the saw mill for an engine

transplant! This took all winter, 96 - 97. The summer of 97 saw limited cruising with the new diesels as Ron was carefully feeling every thing out. It wasn't till the summer of 98 that the Cats displayed their capability to destroy shafts, breaking two of the 1 3/8" shafts that summer :-(   Because they break just aft of the strut, this also cost Ron a pair of props. No problem! Knowing later 38's came with 1 1/2" shafts, Ron now knew next winter’s project merely involved 2 new shafts, 2 new struts and cutlass bearings, 2 new stuffing boxes, and reboring the shaft couplings and propellers. Piece of cake ! All is well now that we have 1 1/2" shafts made from the strongest stainless alloy!

(Another author note -- I have a friend that says "Caterpillars just want to dig dirt, and they can dig really hard!”  You probably know where we are heading ----)

At some point in the summer of 99, the Cats 'dug really hard', and snapped one of the new 1 1/2" shafts :-(  As Ron told your author 15 years ago, the next winter he opened his wallet WIDE and watched really large amounts of money pour out. This time it involved going to 1 3/4" shafts which required two new shafts, props, couplings, custom struts with new cutlass bearings, and 2 larger shaft logs fiber-glassed to the 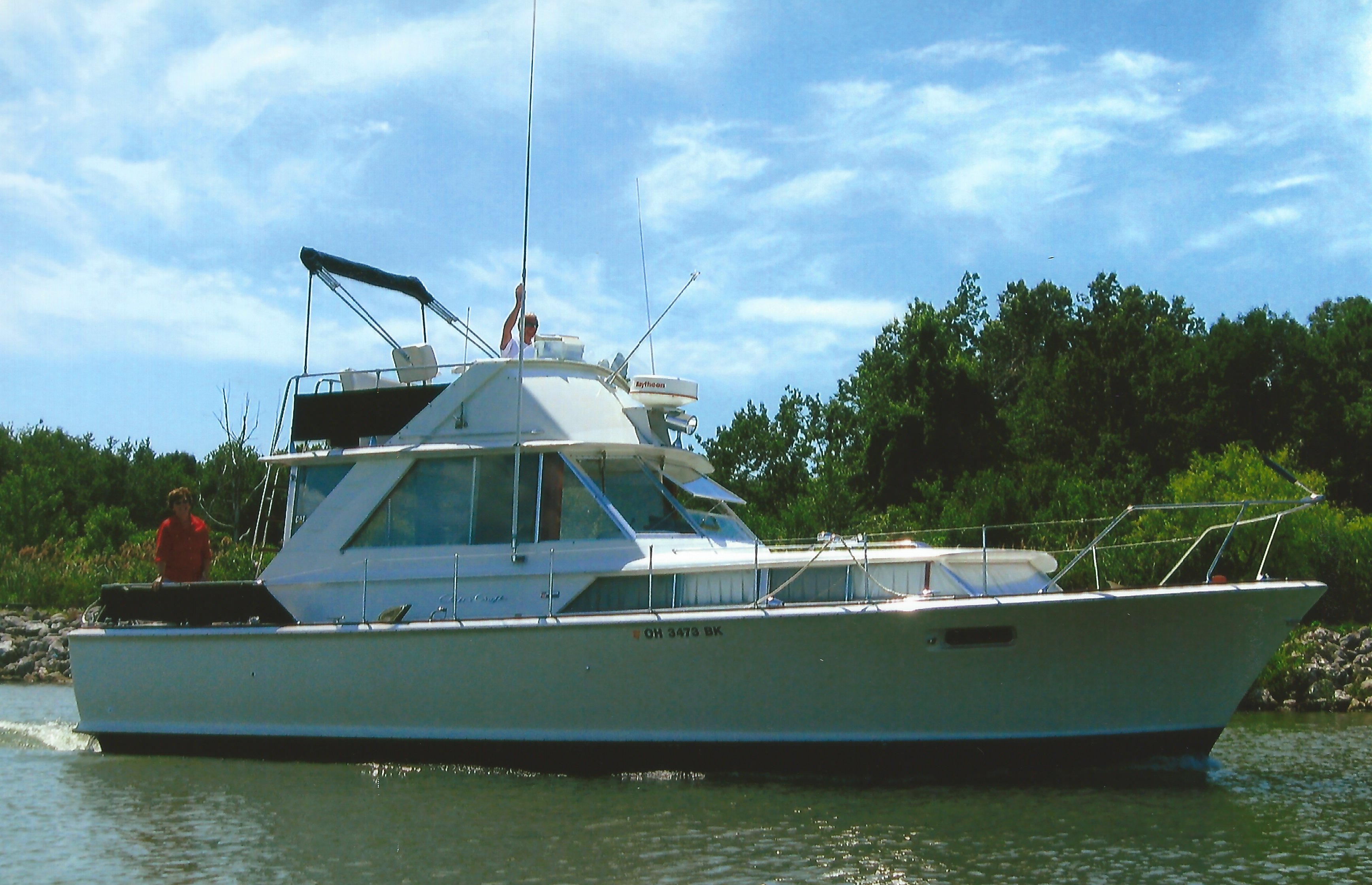 hull bottom. This is serious, expensive surgery! In 2001 the club's first Rendezvous was held at Drummond Island, over 500 miles from their home port. This was Summer Song's big test with her new 1 3/4 shafts. She made it to the island and back home just fine, displaying the fuel economy diesels are known for. Ron & Pat received the longest trip by boat award at this rendezvous! Your author had the privilege of a ride on Summer Song at that rendezvous, and to this day I still remember how gingerly Ron applied throttle taking the boat up on plane! I think at that point he still thought his Cats were capable of breaking even these shafts :-) Well, his Cats have behaved ever since and the boat has been the paragon of reliability since. Ron & Pat enjoyed this rendezvous and have attended many since then, making many more good friends. In 2003 the club's rendezvous was in South Haven, Mi. This was about 750 miles for Summer Song, so Ron & Pat came by car to see friends made 2 years prior, and to make some new friends! Ron's luck had clearly changed -- his Cats were behaving and not busting things. The club's SuperDisc was introduced at this event. A drawing was held to give SuperDisc #1 to one of the attendees, and Ron won ! An interesting story about an interesting couple who had a vision of their dream boat and pursued it with a lot of money, and even more effort. The end result is a highly customized 38 Commander that looks stock on the exterior, but reflects their tastes and desires inside and in the engine room.  Summer Song is one of very few club boats over the years that have undergone such an extensive rehab, and then gone on to reward their owners with 14 years of reliable, trouble free cruising. The club is fortunate to have dedicated members like the Smokers!

More Information on the 38 Sedan Commander