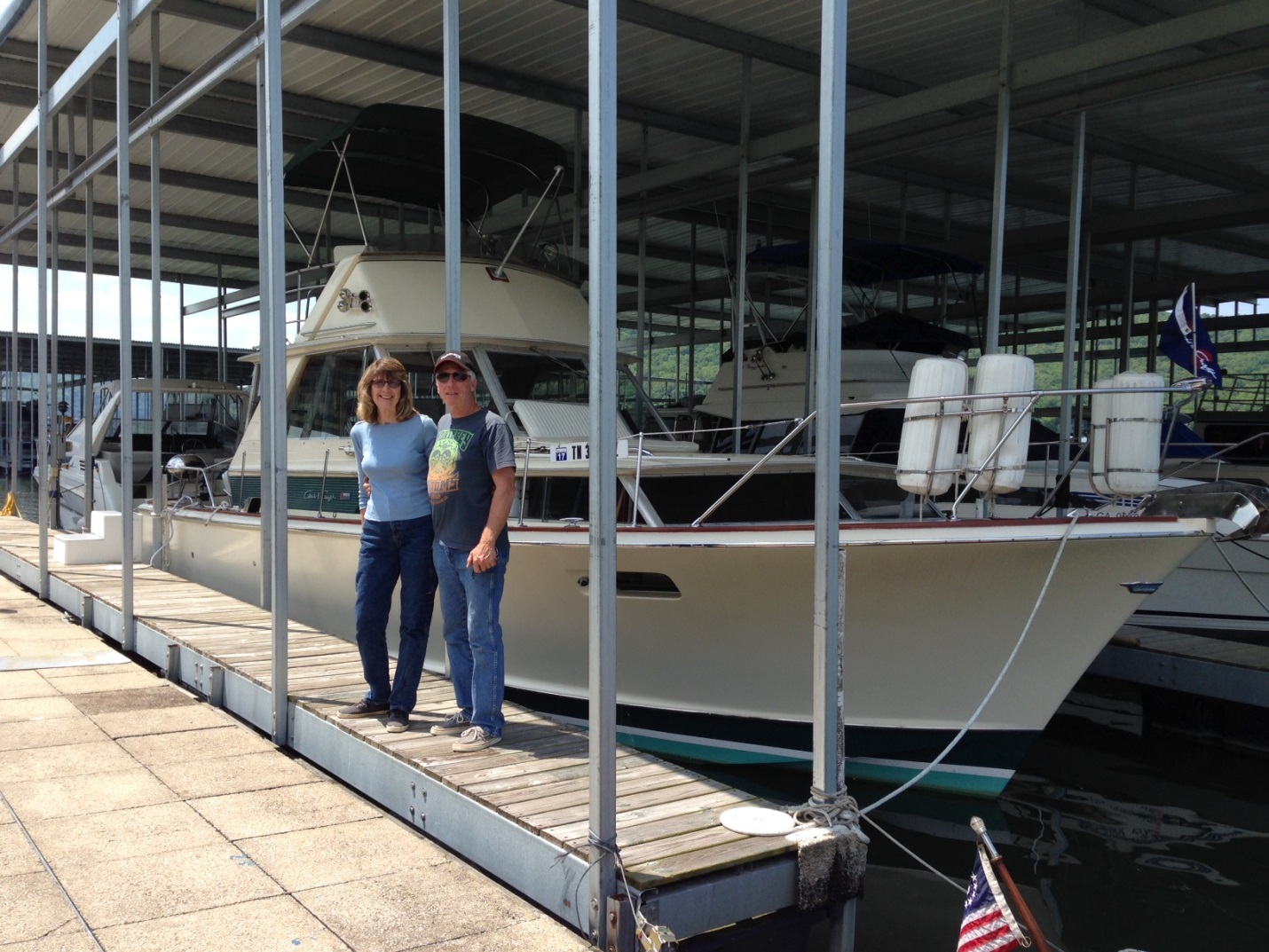 Wayne and Jan Roworth have owned "O’Tawanda" for a year.  "O’Tawanda" is a 1967 38’ Sedan FB they purchased from fellow club member William “Bill” Smith.  Longtime members of the club will remember Bill’s restoration efforts.

Wayne and Jan will be married 28 years in June.  They currently live in Flintville, TN and keep the boat in Guild, TN at Hales Bar Marina which is about an hour and a half away.  They moved to a small farm in Flintville to be closer to Jan’s family in Huntsville, AL.  They also own property on Putman Mountain, AL where Wayne is building a cabin.  They have a daughter that lives in Toronto, Canada and is a geological engineer.

Wayne found "O’Tawanda" listed on craig's list and decided to be noisy and go check her out.  Over three visits he could not find anything wrong with her.  So he asked Bill what was wrong with the boat.  Bill said the only thing wrong was an oil pressure gauge and one receptacle wasn’t working.  So far the only thing they have had to do to the boat is add a grill and that grill came from Bill.  They are extremely happy with their purchase and Wayne loves not having a project and just being able to enjoy the boat.  (Bill & O'Tawanda were profiled in the Winter 2011 "Styled in Fiberglass". http://tinyurl.com/Otawanda) 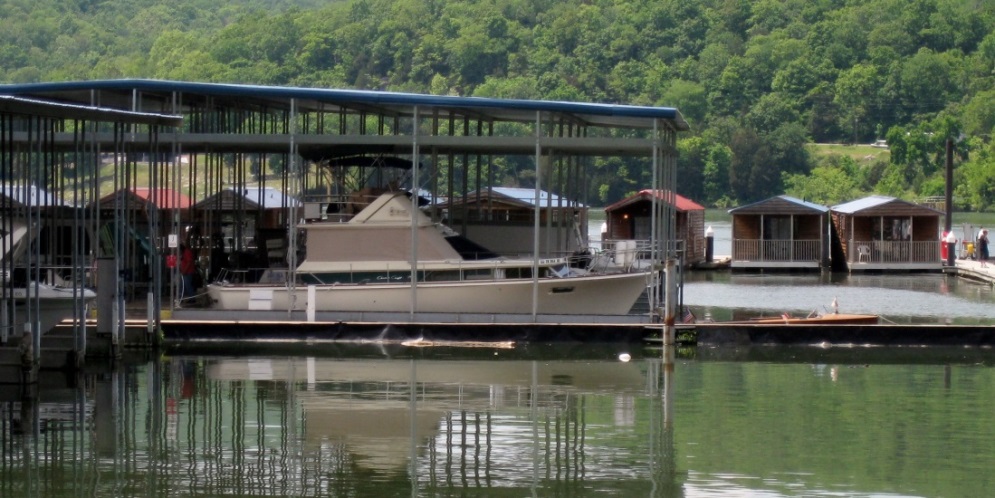 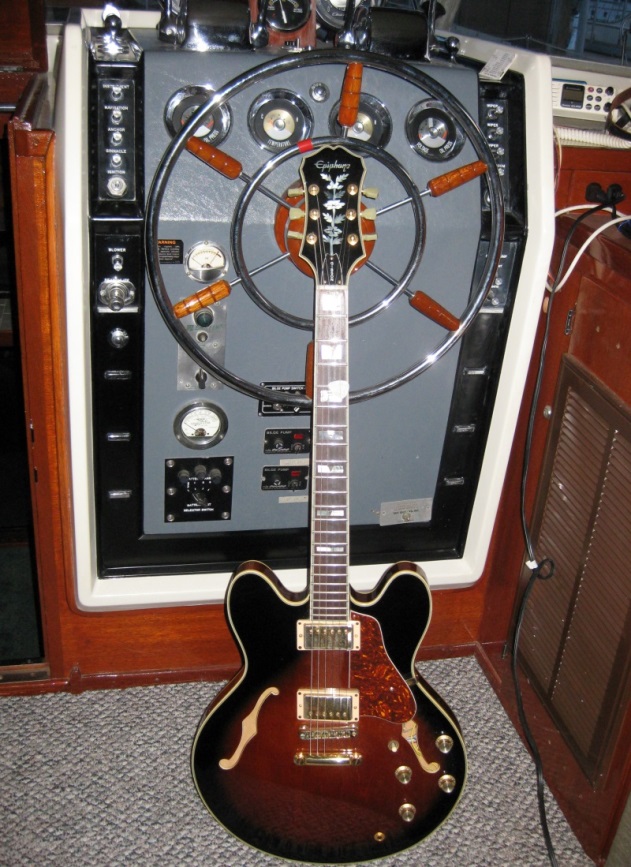 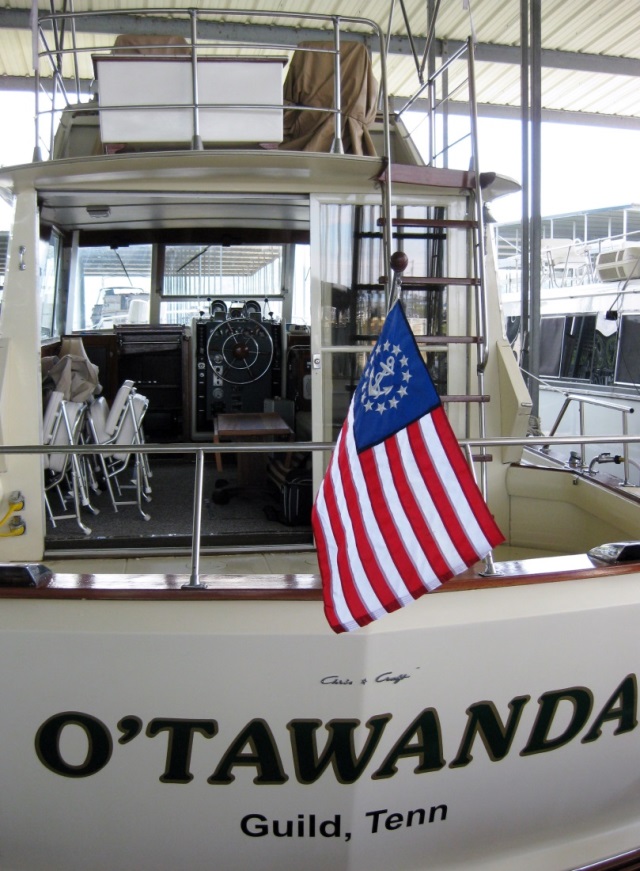 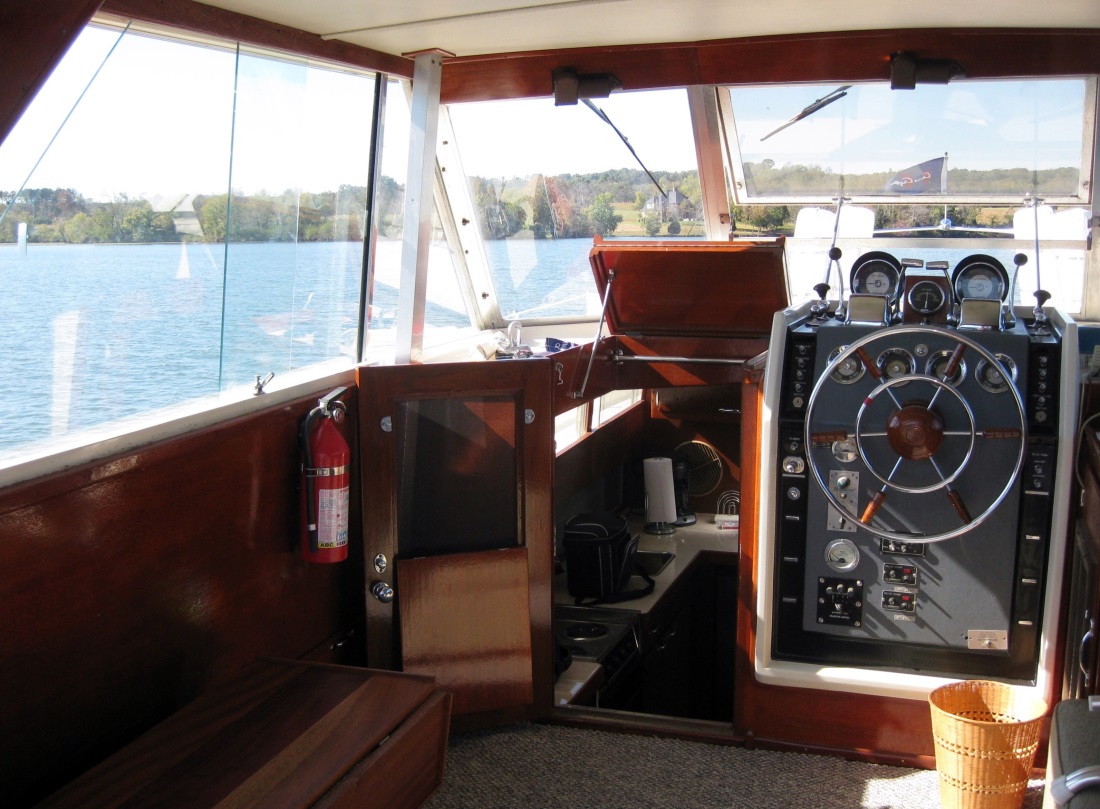 They also own “Grandad Boat”.  The name came from Jan's granddad.  Wayne and Jan rescued her from her Uncle's barn in Kansas in 1998 and restored it himself.  It’s a beautiful 1941 15' Century Utility boat bought new by Granddad in 1941.  Jan has fond memories of her, her sister and cousins, all toddlers,  going for rides in what they called "the speedboat". 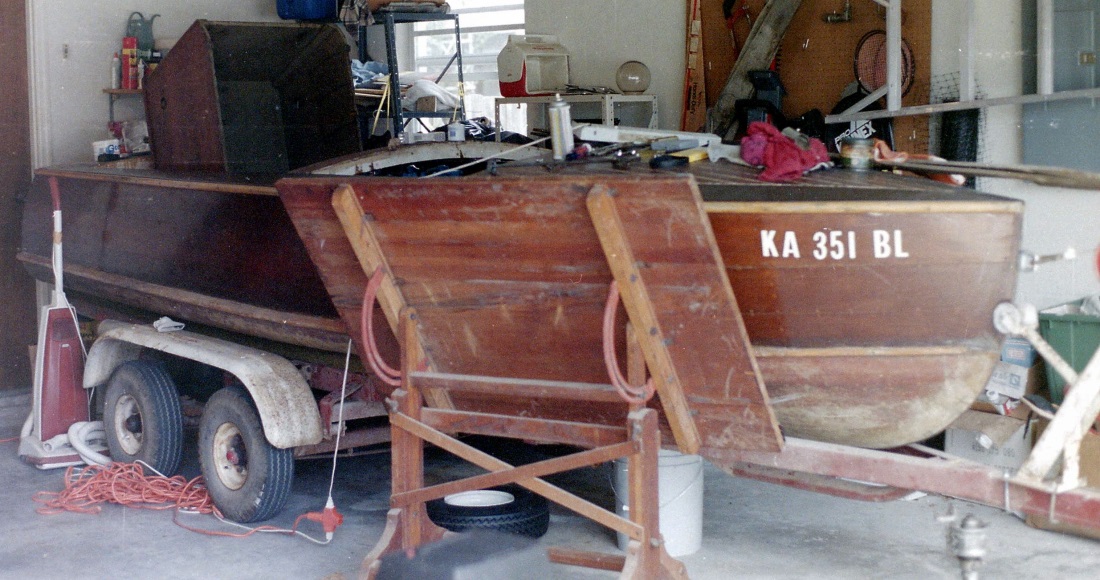 1998 trailered from Kansas to Florida

Wayne and Jan joined the Commander Club in May of 2014, and did they ever jump in with both feet.  Wayne and Jan just hosted a Regional Rendezvous at their marina. I cannot tell you how much fun it was.   About 24 people attended with folks coming from Wisconsin and New Mexico. It was great to get to know other Chris Craft nuts. 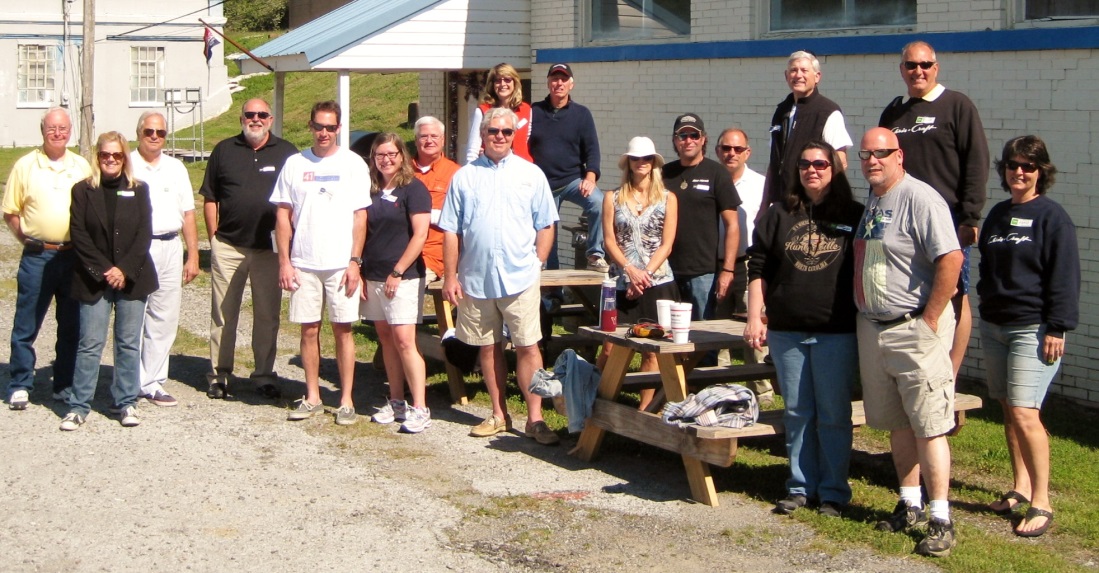 One of the highlights of the event was the band that played Saturday night.  We found out that Wayne is an accomplished guitar player and has been playing since he was 8 years old.  When he was 10 he asked his dad for an electric guitar.  His dad agreed and a new Sears’ electric guitar was his.  The only catch was Wayne would have to work at his Dad's office that summer to “pay” for it.  Wayne said it was a life lesson that stayed with him.

Wayne’s first gig was as the community center when he was around 12 years old.  When he was around 18 he answered an ad in the Toronto paper.  A band was looking for a guitar player and they played all original music.  They cut an album, “It’s All Meat” which was released in Canada by Columbia Records.  It is still considered a great example of garage rock.  Along with playing the guitar, he sang lead on the LP cut “Self-Confessed Lover”.  When in Florida, Wayne played with the band Chrome Yellow and played many venues including the House of Blues.  They cut three albums, one in Nashville and Wayne wrote all the music. 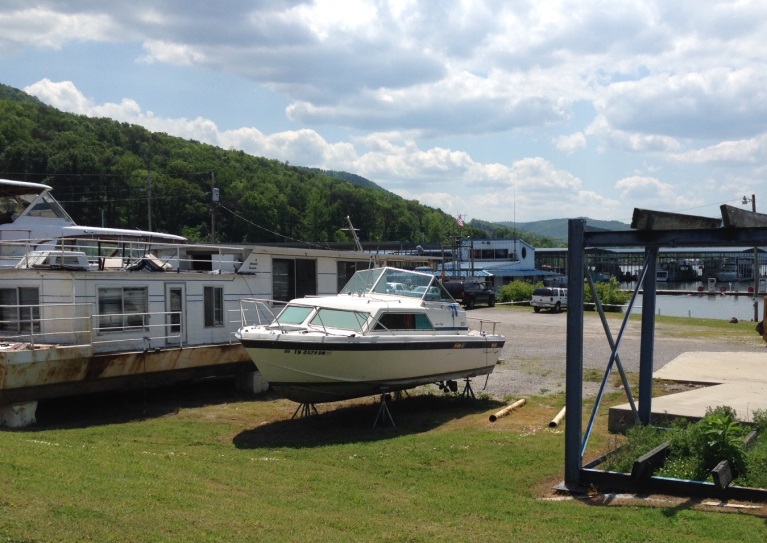 Wayne and Jan had a 1980 Chris Craft 25’ Express when they lived in Florida.  They kept "Miss Mary" at their house on the gulf and enjoyed 20 years of boating with her.  Their favorite spot was Anclote Key which is an uninhabited island and perfect for a day of fun for them, their daughter and their dogs.  They had “Miss Mary” until about 10 years ago when it was sold and taken to Georgia.  The main reason “Miss Mary” was sold was Wayne decided it was time for him to retire and downsize so they could live debt free.  The first time Wayne went to Hales Bar Marina to look at "O’Tawanda", he noticed a boat sitting on stands that looked a lot like the boat he had owned.  He called Jan, told her and she said go check it out.  Imagine his surprise when he realized it was "Miss Mary" and she had been abandoned.  While Wayne doesn’t have plans to do anything with "Miss Mary", he says she haunts him every time he comes to the marina. The "Cherokee Curse"!*

* The marina sits on former Native American lands, and it's supposedly disturbed by a Cherokee curse.  We were having so much fun the first night of the rendezvous it made us go to bed by shutting down the power to the entire marina.