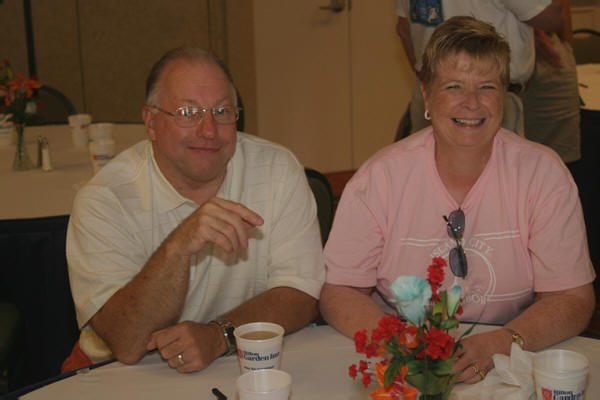 Clif and Lyn Orphal at the CCCC Rendezvous 2006 which they organized together with their son Chris and his wife Julie.

Have you ever purchased something that you knew from the beginning was one of the best decisions you ever made? Meet Clif Orphal and his wife Lyn who - after fifteen years- still share that feeling over their 38‘ Commander Express Sequel. 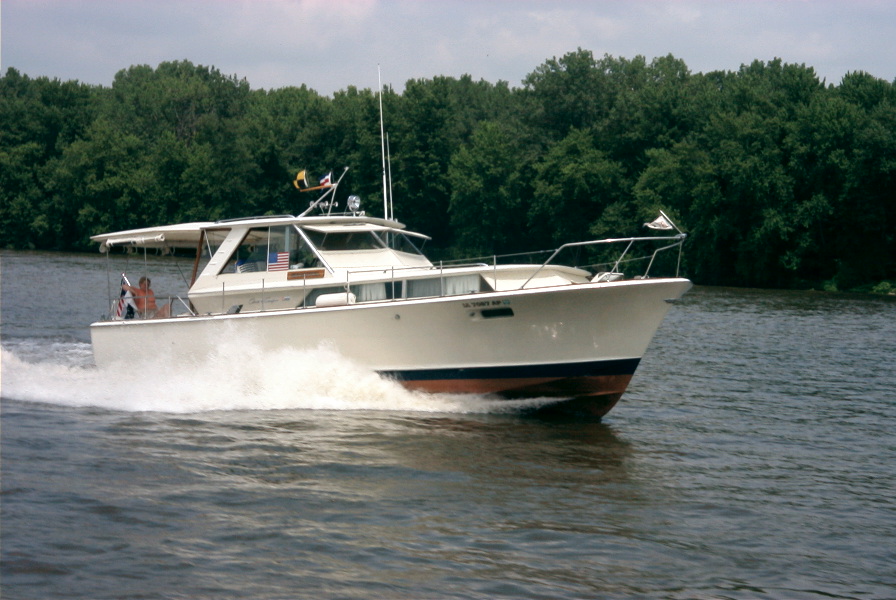 The love affair with Commanders began years before they actually purchased Seaquel. Their first boat was a 18’ Crestliner. When their son Chris was growing up, Clif and Lyn decided they needed a family activity that all be all involved in together. So the search began and ended up with a 1972 22’ Century Coronado. But along the way, Lyn decided what she really wanted was something with a “potty” in it.

One day at a marina Clif spotted a 31 Commander in the work area. He stopped by several times in following weeks and every time he saw her, the styling, proportions, and the amount of room, just won him over. It was then and there he knew he wanted a Commander and Lyn also fell in love with the whole concept and the presence of a ”potty”. Unfortunately, the following month it was sold.

The Orphals keep their boat at a marina in Sabula, Iowa. Boating on the
Upper Mississippi inevitably means encounters with all kinds of vehicles!

A couple of years later Clif and Lyn ran across two 35 Commanders slipped next to each other and one had a For Sale sign on it. Of course they had to stop because it was a Commander and the owners graciously and proudly showed them the boat. They both forgot about the 31 Commanders as the 35 was a bigger boat all around with totally different styling lines. Their son Chris was still in college at the time, so the 35 Commander was just out of their price range and the boat was eventually sold to the Sherriff of McHenry County, Illinois.

When Chris finished college the search for a Chris Craft was on again. In those days there was no Commander Club, Internet or the avenues we know today to search out boats so it was hard work to find the boat we wanted. A marina in Bay City had a 38' FXA Commander advertised that “you might want to look” at. Upon arrival the marina owner said it had been sold and was no longer there. He mentioned that a marina up the road also had a 38 Commander, Express Sport Fish, but it was a little ruff so Clif and Lyn passed. That’s when the 38’s became our new focus. In retrospect, Clif sometimes wonders what would have happened had they seen a 47’ or a 55’!

During the search they finally found a 38 in the Minneapolis area. The owner was a lady who was ex-merchant marine and knew the boat inside out and did all her own work, engine work also. Clif and Lyn’s purchase routine included having an survey and inspection along with all three engines being evaluated. Results were good and the deal was done. The trip home was enjoyable, relaxing and the three day venture was just right time frame, getting to know her and realizing this is what they were looking for all along, a Chris Craft Commander.

Over the next year, the Oprhal’s son started spending weekends with his parents on Seaquel and fell in love with marina life and boating with larger boats. One day they received a call from the Sheriff wanting to know if the Orphals knew anyone who might be interested in their 35’. When Clif mentioned it to Chris his ears started burning and the fire was lit. As the ice melted in the Chicago area and spring was in bloom, he had it transported to the Mississippi River and today we enjoy slips next to one another.

Shortly after the purchase of the 35’ and 38’, Chris ran across the Chris Craft Commander Club on the internet and Clif, Lyn and Chris have been proud members ever since. Chris and Lyn even served as Executive Committee members for a number of years.

Clif and Lyn speak fondly of the people they met through the club and say many of them have almost become family. Clif comments especially on the exchange of information that is excellent and has been so helpful in many ways not only in receiving but also sending. In 2006 Lyn, Clif, Chris and his wife Julie hosted the Big River Rendezvous in Dubuque, Iowa. Not the biggest, but as some attendees stated; “it was one of the best they had attended”.

Since their purchase, Sequel’s interior has been completely stripped, sanded, re-stained and varnished, new 2 piece mahogany swim platform made, and a new aft enclosure super-structure made with new canvas. Up coming projects include replacement of all toe rails and replacing the canvas enclosure and a few other miscellaneous projects.

Today the Orphal’s Commanders are part of their lives and they enjoy every weekend on them during the boating season. And just think, their grand children are growing up with Chris Craft Commanders, enjoying the life and all it offers, all because Lyn and Clif wanted a Commander. With a ”potty”!