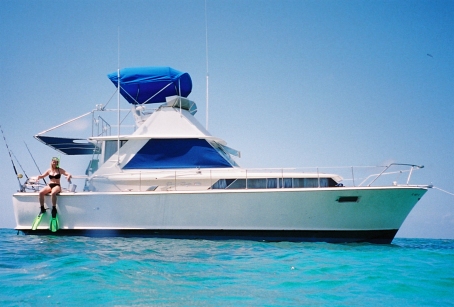 The present “Squander Bucks” represents the third all fiberglass Chris Craft Commander that my family has owned over the years between 1970 and the present – and the second to bear that name. The first was a 27 foot Commander and the second a 31 foot Flybridge Commander which first bore the “Squander Bucks” name. The current Commander is a 1965 38 foot Commander originally made as a Sedan model with gas engines and no flying bridge. I have seen many floor plan designs for the 38 foot Commanders and thus far have seen none that quite match the layout of her design. I was told that original owner was from Michigan and the boat was kept on the Great Lakes for several years. In 1983 or '84 the boat was purchased by my father in Florida to be used for fishing and cruising the Treasure Coast and Bahamian waters. At that time she was rechristened “Squander Bucks”. Around 1988 or '89 the gasoline engines were removed and the boat re-powered with a pair of GM Toro Flow Diesels. However, he did not upgrade the shafts and strictly used her at trawler speeds – frequently towing boats up to 23 feet for use in the Bahamas as smaller fishing and diving platforms.

Upon the passing of my father in 1992, I inherited the Commander and began a long journey to upkeep and “upgrade” her a little year by year. Little remains of the original mechanical workings of the boat other than the two bronze rudders. From stem to stern most everything has been replaced at least once as well as many features added that were not available in 1965. Not meant to be a complete listing by any stretch but many of the new/upgrade items include:

Windlass and pulpit, Freezer, Refrigerator, shower and head, air conditioners, diesel generator 8Kw, hydraulic steering system with autopilot, complete Awlgrip painting (some areas more than once). New heavier shafts, struts and propellers with each re-powering. In addition the factory fuse panel system was removed and an up-to-date circuit breaker system added as well as a second 30 AMP shorepower to help keep up with the electrical loads of two A/C's, refrigerator and freezer. With the running gear changes ”Squander Bucks” was once again able to cruise on top as she was intended. As she is outfitted today, cruising speed is at 21 mph with a top speed of 25 mph.

In 1994 a flybridge with Bimini was added and later upgraded in 2010 with a new aluminum radar arch and console system. She was re-powered once again in 1998 with twin Detroit Diesel 8.2L Turbos. On the bridge instrument clusters hold the needed GPS's , depth sounders, a PC navigation monitor and Simrad radar displays. One new addition is a instrument system by CruzPro that allows the digital display of all the pertinent engine, generator, fuel, and engine room data even with these pre-computer controlled device engines (no CDI box).

“Squander Bucks” has been in fairly constant use traveling the waters between Vero Beach and Palm Beach Florida as well as the Northern and Central Bahamas since first purchased by our family in the 1980's.

While she has not been kept to a perfectly clean example of the original boat design -whether each change has been for the creature comforts needed today, safety or navigation, or just plain “fishability” all have been considered and evaluated on how they would impact the styling and lines of this classic design. There is never a trip made very far from home without at least one fellow captain stopping to comment on how they have memories of either themselves of a close friend or family member having owned a Commander at sometime in the past.

Our family hopes to continue generating memories for some time yet with this engendered family member. 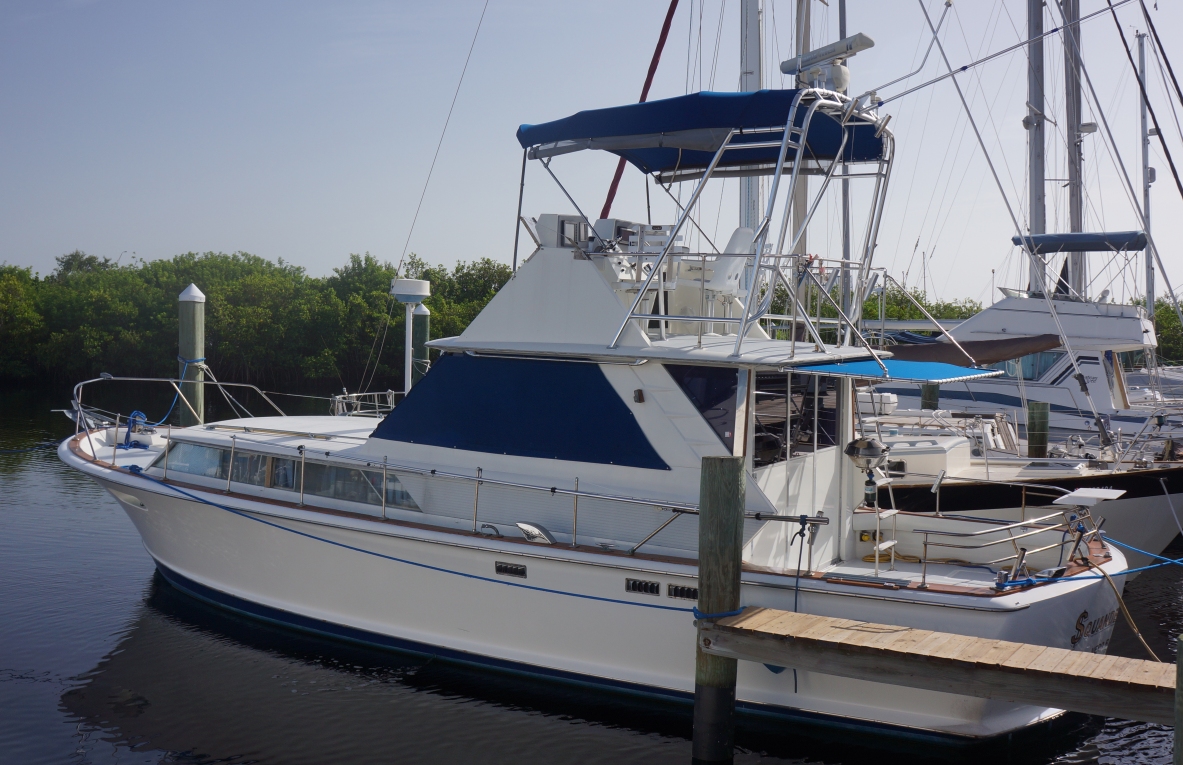 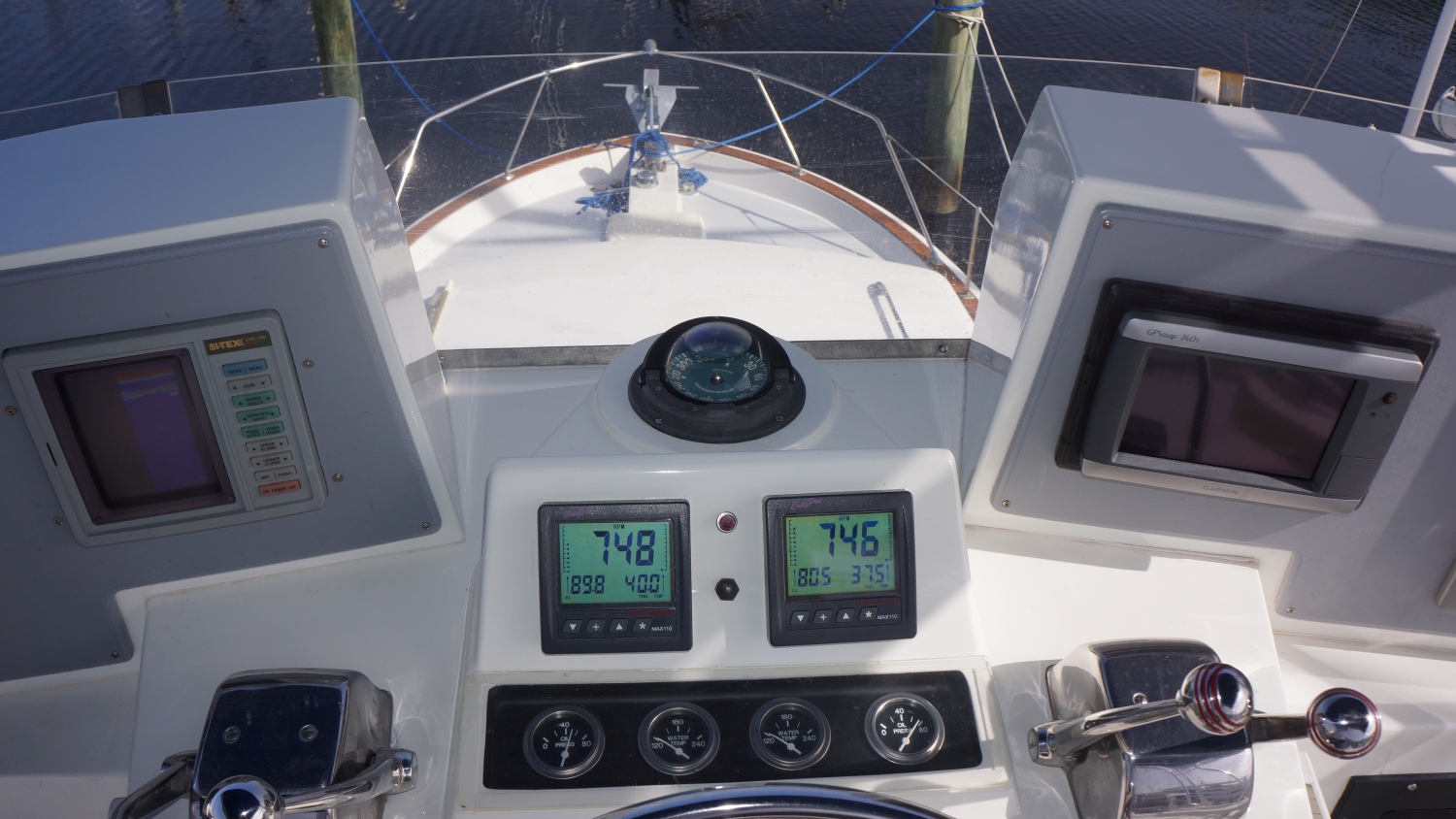