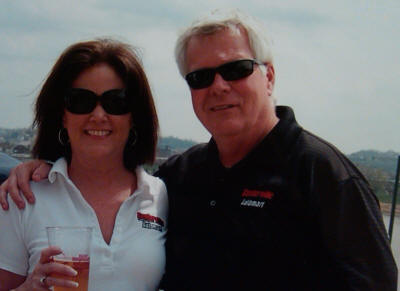 Scott and Marcia Tolliver live in Miamisburg, a suburb of Dayton, Ohio and boat on the Ohio River.  They own Miss Ginger, a 1976, 41 foot Commander named for their Golden Retriever Ginger.  They bought the boat in January 2012 and keep it at the Four Seasons Marina in Cincinnati.

Scott and Marcia have been married 16 years and have owned a few different boats.  Before purchasing Miss Ginger they owned a Sea Ray but were always impressed with their friends’ 41-foot Commander and all the space it had.  When they found Miss Ginger they still owned the Sea Ray but have since sold it.

After buying Miss Ginger they spent 5 months during a mild winter working on the interior and mechanicals.  The previous owner had used the boat infrequently and kept it in inside storage the rest of the time so it was in great shape but needed some updating.  This past summer they did more mechanical work and a few of the projects included installing a 20 gallon hot water heater and replacing every pump and impeller. 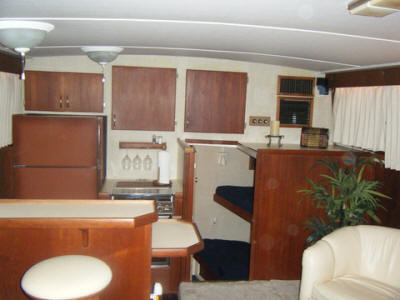 Miss Ginger has a very unique history.  It was once owned by Ed Glass, the CEO of Perkins, and was purchased by Perkins to market their engines to Chris Craft.  It was out fitted by Perkins with two TV8.510M turbo diesel engines.  It was owned by Mr. Glass until the late 90's when Bob Carnahan purchased it named it Well Used.

This Commander was delivered out of Washington Marine in Cincinnati who still maintains her to this day.  The Perkins diesels run extremely well and strong.  The wake is huge and the jet skiers love to see it on the water.

“Marcia has been a trooper” Scott said with a smile. “She forgave me when I committed the cardinal sin of buying a boat prior to selling the current one and some of the tasks we tackled were pretty intimidating now that we look back.  But we both just put our heads down and went for it and it all worked out.”  When I asked him what his favorite project was, Scott replied “no projects were my favorite but drinking beer on it is a lot of fun!”  (Love that answer!) 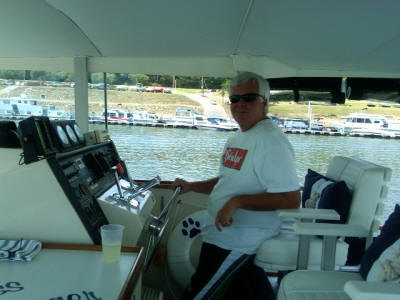 This past summer the Tollivers cruised the Ohio River, anchoring out for baseball games, concerts, fireworks and other festivities they came across. Their favorite trip this year was just up the river to New Richmond, where the locals were great and the band at the marina was rockin’.  Scott said it was a great weekend spent with their dock neighbors.

Since the neighbors also own a 41-foot Commander they get a lot of attention when they cruise together.  Double Trouble!   They send out a huge thanks to the Commander Club for the help and advice they have received.