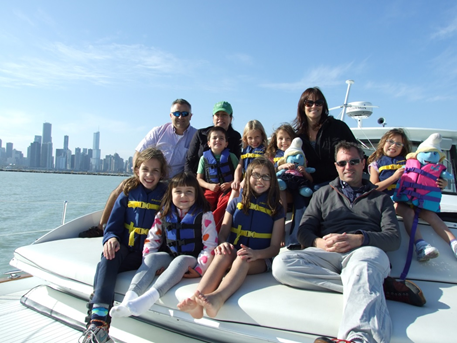 Ben and Nick have been friends since they were young boys.  Nick’s family owned an 18’ boat that they would trailer to the beach every weekend.  On every birthday, Ben would blow out the candles on his birthday cake, wishing for a boat.

Over the years, Ben owned several boats including a 24’ Mariah runabout, a 33’ Formula and a 45’ Sea Ray Sundancer.  He met Sharon when he owned the Mariah and she loved the boat!!  After getting married and buying the Sundancer, they decided to embark on a long trip before having children.  They took a year off, and headed down to Key West, via the Great Lakes and the east coast, spending the winter in Key West.  What a trip!!

In 2011, Nick and Ben started looking for a boat that would be large enough to accommodate both families.  They put no limits on their search, but the Chris-Craft Constellations drew their attention.  They figured they would need about a 50’ boat to comfortably fit the family and they continued to be drawn to the classic wood boats.  The gorgeous lines of those beautiful old wood boats, and those spacious accommodations would provide plenty of space for their families. Then a story appeared in a local publication about a 50’ mint condition Constellation that went for a cruise on Lake Michigan.  It was a beautiful day for a cruise, when suddenly two rogue waves hit the boat. The boat handled the first wave well, but not the second. One of the bottom planks popped and the boat sank in one and half minutes. decide to shift their focus to fiberglass hulls, wanting the safety of a Chris-Craft fiberglass  hull.  They travelled all over the county, looking for the right boat. They found “Dig Deep” in Sarnia, Ontario. There had been a fire in the cabin but the hull was solid and the engines intact.They knew they wanted to remodel the cabin, so the fire damage was not much of an issue.Ben and Nick hired a captain to pilot the boat from Sarina to Bay Harbor in Michigan. The captain encountered several issues, such as taking on water and loss of steering. Hiring the captain was money well spent.  At Bay Harbor, the known issues were fixed and Ben and Nick piloted the boat from Michigan back to Chicago.  That portion of the trip went flawlessly.

For the first year, they used the boat pretty much, as-is. Every Friday night was Happy Hour and they could expect from 18-25 people every week. They started a Facebook page, for Dig Deep,  on which they posted photos of the boat and posted when they would be going for cruises.  Anyone that wanted to join them, just needed to be there by a certain time.  With all of this entertaining, Ben and Nick could envision  a cabin layout that would best suit their needs and be family-friendly. They hired a designer that made their vision a reality. The cabin was gutted and completely redone by the summer of 2012, with a  modern, efficient, clean design.  The salon was dreary, the woodwork was black, and there were about four layers of wall coverings. In addition, some windows had been covered and a microwave hung from the ceiling of the kitchen, blocking the sightline between the galley and sitting area. 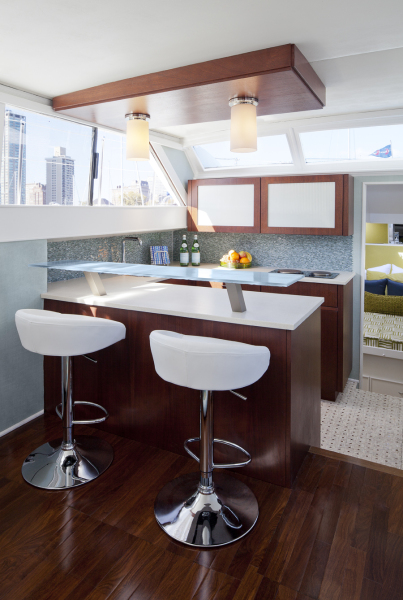 Now, the kitchen is equipped with a cooktop, but no oven (for more assembling of meals than cooking). Crisp, white solid surface counters top teak cabinetry, and white resin panels lighten the upper cabinet frames. A raised counter crafted from acrylic patterned with a wave is designed for easier serving. The floor is chipped limestone with a heavy grit that makes it nonslip. All seating is upholstered in no-worries materials (and everything turns into flotation devices). White Chenille, punched up with turquoise pillows, keeps the space light. Ten years ago that kind of fabric wasn't available. And even though it's white, you don't have to worry about wet bathing suits, staining, spilling drinks or Popsicles. 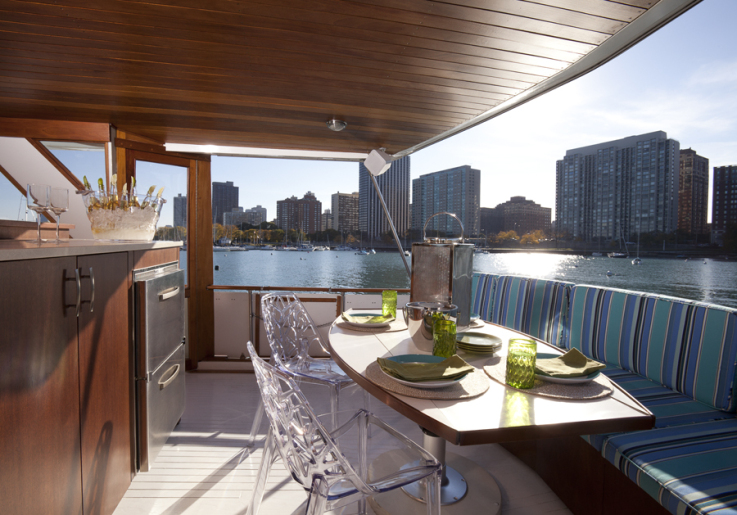 At the stern, there's al fresco dining and entertaining in a sheltered area. The versatile design includes banquette seating and a high-low table, which allows views to a pop-up TV, installed into the opposite cabinetry. There's also a trough sink that holds ice and beverages, as well as a double-drawer refrigerator. 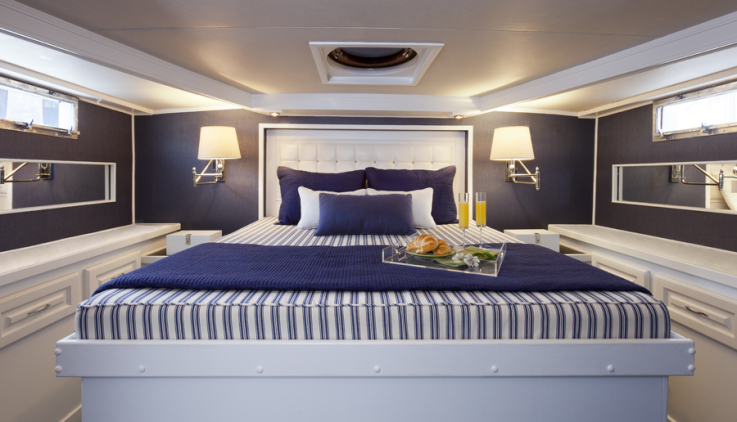 In the staterooms, the designer upholstered all mattresses in colorful fabrics for easy maintenance; bed linens and comforters go on top. With all of its creature comforts and good looks, it's no wonder the families spend a lot of time on the boat. It's a traditional boating experience, with 21st-century amenities.  From April 1 until almost November 1, they go out three to five times a week and entertain every weekend.

Dig Deep has been featured in articles in the Chicago Tribune and Lakeland Boating.